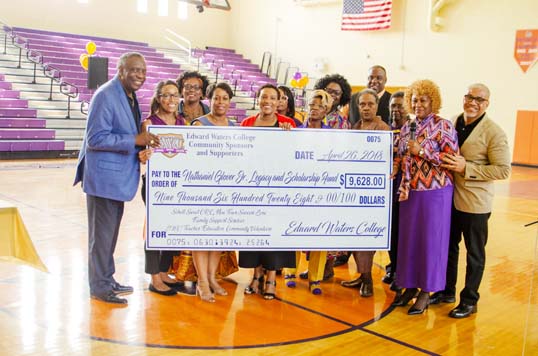 OVer the weekend, EWC staff, city council members, family and friends attended the “The Man, The Myth, The Legend In The Community” event held in honor at the EWC Gymnasium.

The free event was a celebration of Dr. Glover’s years of servant leadership and his contribution to the safety, education and wellness of the Jacksonville community and students of Edward Waters College.

On April 11, 1995, Dr. Nathaniel Glover made history by being elected as the first African American Sheriff in Florida in more than 100 years and the first African American Sheriff in the history of Jacksonville.  He served for two terms and retired from the Jacksonville Sheriff’s Office on June 30, 2003.  Dr. Glover is also a product of EWC where he earned the Bachelor of Science Degree in Social Science.  He later earned the Master’s Degree in Education from the University of North Florida.

During his first term in the Office as Sheriff, he donated $240,000 of his pension benefits to a college scholarship fund for deserving low-income children in the Jacksonville community. Under Glover’s leadership, the Center for the Prevention of Health Diaparaties was establised, the school played their first home football game in 147 years and the Susie Tolbert House opened among other accomplishments.

Other retirement events included a gala and other activities. Shown is Former EWC President accepting a check from the Schell Sweet Center for the Nathanial Glover, Jr. Legacy and Scholarship Fund.