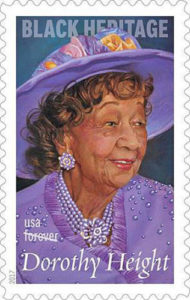 On Feb. 1, the U. S. Postal Service will kick off 2017 Black History Month with the issuance of the Dorothy Height Forever stamp to honor the civil rights legend.

The Dorothy Height Forever stamp will be the 40th stamp in the Black Heritage series. The late Dr. Height is considered to be civil rights royalty. Having led the National Council of Negro Women for four decades, Height was a recipient of the Presidential Medal of Freedom, awarded by President Bill Clinton in 1994 and the Congressional Gold Medal, awarded by President George W. Bush in 2004 for her pioneering work for the civil rights of African-Americans and women. President Barack Obama gave her eulogy upon her death on April 12, 2010.