For more than 20 years, comedian Cocoa Brown crowds around the country with her edgy and politically conscious comedy. Brown has built a successful career with appearances in several movies, and as a co-star on the hit show “9-1-1,” currently airing on the Fox.

Last weekend, Cocoa brought her comedic talents to Jacksonville as she was the headliner at the Comedy Club located on Beach Blvd.  The show was sold out with fans excited to see the comedy legend discuss her life, politics and family antics.

Brown has said that her roots in comedy began as a young lady in grade school making her classmates laugh. Fast forward several decades later and she’s still at it. Her edgy comedy has made her a fan favorite, and allowed her to build a strong following throughout the country.

Cocoa credits her success to the fact that she’s real with her fans. She says that draws material from both joyful and painful life lessons, bravely weaving humorous tales that uplift, upend, and transform.

Shown is Cocoa with fans Bryant and Anne Gause. 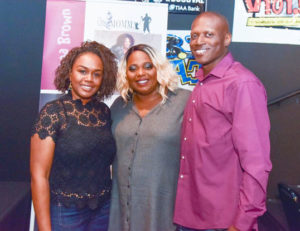