Known for their commitment to the community and charitable giving, last weekend, the Crimson and Cream of Delta Sigma Theta Sorority Alumnae Chapter hosted a comedy explosion show and fundraiser with local comedians at the Salem Centre on Bonneval Rd.

The event was a success as sorors and guests filled the center to hear the amusements of local comedians: Funnybone, Lady AJ, K. Webb and Ozrick Cooley. DJ King Ron provided music spinning old school hits.  Proceeds support the educational and charitable programs of the sorority.

On February 9, 1946, the Alpha Iota Sigma Chapter of Delta Sigma Theta, now known as Jacksonville Alumnae Chapter, was officially chartered. The local chapter is a diverse group of professional women who have combined their knowledge and skills to launch a series of public service programs that have been maintained and expanded for 66 years.

Shown are comedians smiling after the sold out show. 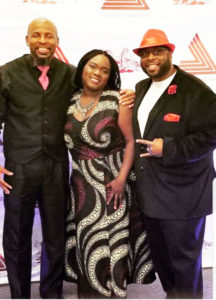