(Yahoo News) The 2021 NFL draft came and went, and after 259 picks, no player from a historically Black college and university was selected.

This came as a surprise. Players from HBCU programs — like North Carolina Central cornerback Bryan Mills — were projected to go in the later rounds of the draft, but had to settle for signing as undrafted free agents.

Washington Football Team advisor Doug Williams was not happy about that, according to the Washington Post.

“It’s hard to believe that not one guy is worthy of being drafted,” said Washington Football Team senior adviser Doug Williams, a Grambling alum and the first Black quarterback to win a Super Bowl. “That to me, that’s a travesty. Hopefully, we can fix it.”

Jackson State coach and NFL Hall of Famer Deion Sanders expressed a similar sentiment Monday, sending out a message on Instagram saying players from HBCU programs were “NEGLECTED AND REJECTED.” 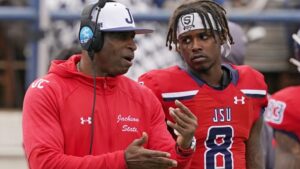 Sanders said he witnessed a number of players from HBCU programs who “were more than qualified to be drafted.”

Why did players from HBCU programs get ignored in NFL draft?

Players from HBCU programs likely suffered as a result of the COVID-19 pandemic, according to the Washington Post.

Smaller programs across the board suffered in the draft from the pandemic, which canceled fall seasons, eliminated pro day workouts and decreased travel for NFL scouts. Faced with uncertainty, NFL front offices relied on powerhouse programs more than usual. Only five players from the Football Championship Subdivision were chosen, the lowest since 1993, along with two Division II players and one from Division III.

Grambling Coach Broderick Fobbs agreed that the pandemic played a role, saying teams had fewer chances to find “diamonds in the rough.” He still expressed disappointment that no player from an HBCU program was drafted.

Following the draft, Mills signed as an undrafted free agent with the Seattle Seahawks. He wasn’t the only player from an HBCU program to sign on with a team. Tackle David Moore signed with the Carolina Panthers, tackle Calvin Ashley signed with the Tampa Bay Buccaneers and defensive back Mac McCain III signed with the Denver Broncos. More players from HBCU programs could sign with NFL teams in the coming weeks.

Still, there could be a decline across the league, where 29 players from HBCU programs opened last season on an NFL team or practice squad, according to the Washington Post.

There’s hope that figure will jump in the coming years. The HBCU will host an All-Star game next season, giving teams an additional opportunity to see roughly 100 prospects from HBCU programs.