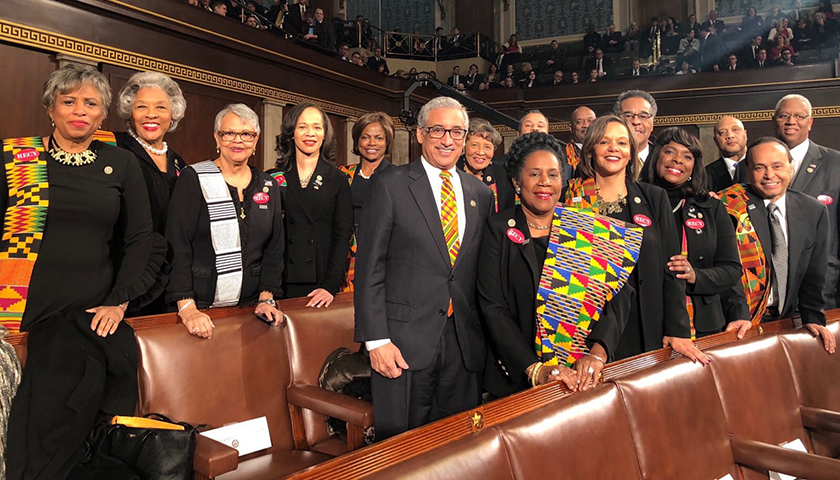 —Members of the Congressional Black Caucus wore Kente cloth-inspired prints to the State of the Union address standing in solidarity with Americans, Haitians and the African nations smeared by President Trump’s racist rhetoric.
— Janelle Jones, an analyst with the Economic Policy Institute, told Vox that, “The recovery of employment was happening long before Trump got into office.”
—The Black unemployment rate is almost double the White unemployment rate, a trend that has endured for decades.

Rep. Cedric Richmond, the chairman of the Congressional Black Caucus railed against President Donald Trump’s boasts about the economy, especially his claims about the Black community, in a blistering response to the president’s State of the Union (SOTU) address.

Richmond said that every action taken by President Trump, since his election, has been destructive for poor, working-class, and middle-class communities throughout the country, as well as communities of color.

Richmond said that nothing that the president said during his speech wiped that slate clean.

The CBC chairman also leveled the charge made by lawmakers and economists alike that Trump is just riding the economic wave that began during President Barack Obama’s tenure.

“He boasts about a booming economy, but it is not something he can take credit for,” said Richmond. “Much like the money he inherited from his father to start his business, President Trump inherited a growing economy from President Obama.”

Richmond continued: “The low Black unemployment rate he boasted about has been falling for eight years and has only changed by one percent since he took office. In addition, while the Black unemployment rate is at an historic low, it is still double the rate of White unemployment and doesn’t take into account the fact that African Americans are disproportionately underemployed and underpaid.”

Janelle Jones, an analyst working on a variety of labor market topics within EPI’s Program on Race, Ethnicity, and the Economy (PREE) told Vox that, “The recovery of employment was happening long before Trump got into office.”

Richmond also said that even though the president’s infrastructure proposal sounded good, he doubted that the proposals would live up to their promise.

“We know that it will be more of the same: toll roads, reduced federal cost-share, and giveaways to his wealthy friends in the construction industry,” said Richmond. “It is important to note that he said nothing about contracting with minority firms.”

Richmond said that the CBC can now answer the question that Trump posed to the Black community in 2016, “with 100 percent certainty.”

Richmond continued: “African Americans have a lot to lose under the Trump Administration and we have lost a lot already, especially when it comes to his justice, voting rights, education, housing, and healthcare policies. President Trump is still who we thought he was and we won’t be fooled by this speech.”