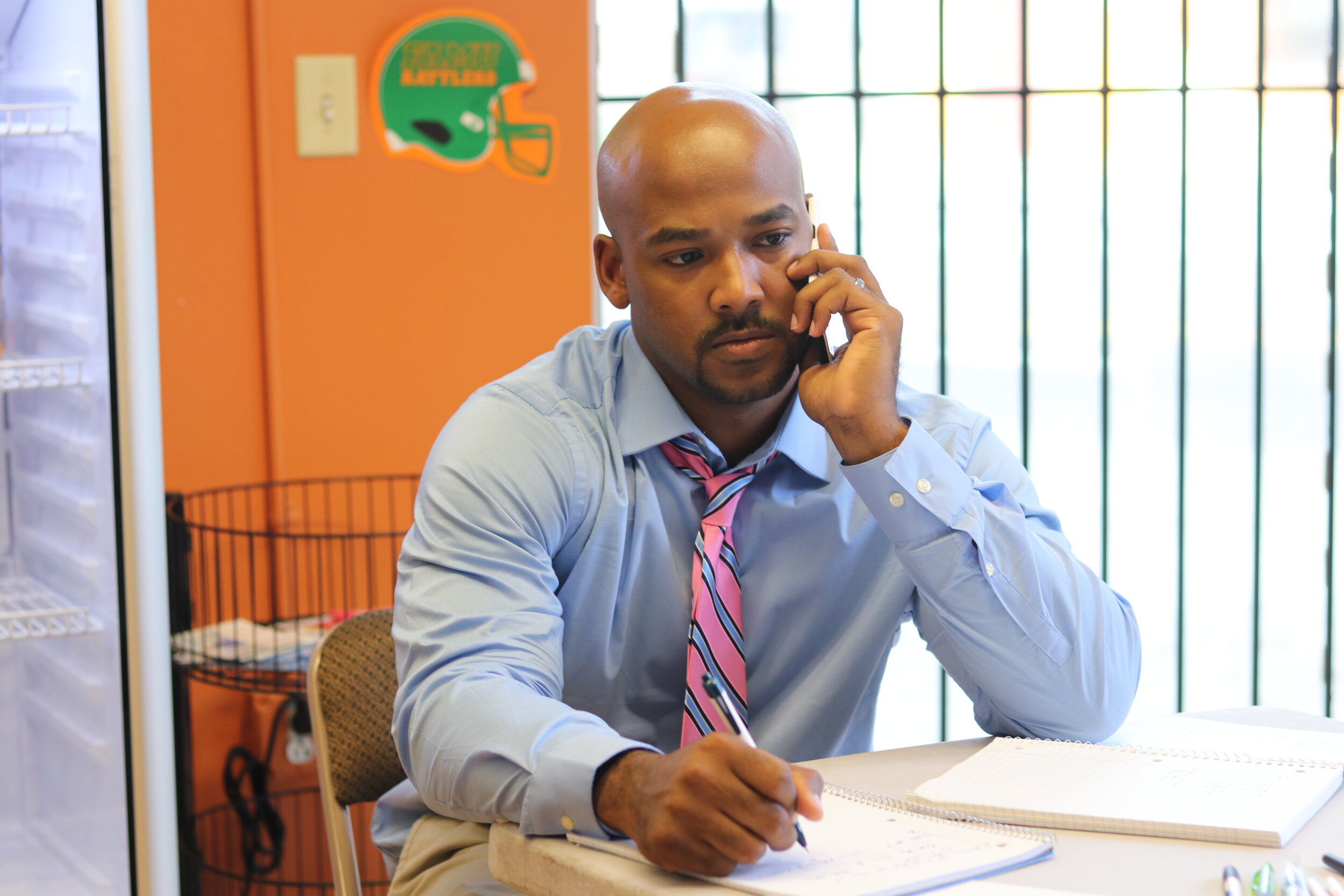 late 1800s with the enterprising Joseph H. Blodgett, architect of historic homes in the Sugar Hill neighborhood, some of which still stand along Myrtle Avenue. Yet, as the proud son of Albert and Karen Chester – him being FAMU’s National Championship quarterback, and her, Miss FAMU – Tallahassee is a permanent fixture of Albert’s upbringing.  Albert grew up with a sense of community and remembers being surrounded by so many positive role models – many being famous athletes contemporary to his father – Bob Hayes, Al Denson, Curtis Miranda and Derrick Gaffney, to name a few. An athlete himself, Albert was ranked one of the top football players in the state and nation as quarterback at Episcopal High School. He continued to lead as the starting QB at Florida A&M University, where he graduated with his Doctor of Pharmacy degree in 2009. Dr. Chester is going to Washington, D.C. with an agenda for ‘The People,” not the powerful. Dr. Chester’s Prescription for better health for District 5 includes: a legislating a pathway to Medicare-for-all and expand care for mental health; Lower prescription drug prices by reforming the “middle man” between pharmaceutical companies, insurers and retail pharmacies and  Improve health and sustainability by supporting farming in District 5 (including small and family farms, community gardens, and indoor agriculture) with programs and partnerships that connect to Champion policies that combat climate change and to Push Congress to take action to save Social Security, which is set to run out of money in 2035.

State Representative (District 13) Tracie Davis –  has served District 13 in the Florida House of Representatives since 2016. Tracie is a life-long resident of Jacksonville. She graduated from William M. Raines High School, Edward Waters College and the University of North Florida. For more than a decade, she was a special education teacher in Duval County. Her desire to inform and engage the community led to her appointment as Director of Education for the Duval County Supervisor of Elections. She spent 13 years there, eventually becoming the Deputy Supervisor. During her tenure with Duval County Supervisor of Elections, Tracie trained over 10,000 poll workers, registered more than 60,000 new voters and conducted 44 elections. Since her election to the Florida House, Tracie has served on several committees including: Public Integrity & Ethics, Joint Legislative Auditing, and Health & Human Services. Her work and advocacy has brought home more than $5 million dollars in appropriations for the Jacksonville community. Tracie is a member of Alpha Kappa Alpha Sorority, Inc., the Junior League of Jacksonville and the Jacksonville Women Network. She is also a youth mentor with Youth Leadership Jacksonville, AMI Kids and Year Up. Tracie has received many awards for her work including: being selected Teacher of the Year at Timucuan Elementary, the Community Leadership Award from the Coalition of Black Trade Unionists, the Champion for the Elderly Award from the Florida Health Care Association and the Community Service Award from Edward Waters College. Tracie is devoted to her family, her faith and her community. She is married to Robert E. Davis and is the mother of three adult children.

Congressman Al Lawson – Florida’s 5th Congressional District  – Congressman Al Lawson is a committed public servant who brings a hard-working, problem-solving spirit to Congress and to the task of creating jobs, improving access to a quality education from the preschool through the post-secondary level and protecting working families. Re-elected for a second term in November 2018 and sworn-in January 3, 2019, Lawson represents Florida’s 5th Congressional District. Lawson received his Bachelor’s degree from Florida Agricultural and Mechanical University (FAMU), where he lettered in basketball and ran track. Lawson went on to earn a Master’s degree in Public Administration from Florida State University and completed his coursework for a Ph.D. in Public Administration. Congressman Lawson has devoted more than half of his life to public service and is guided by the belief that the greatest gift an individual can give is service to their community. Lawson has served the people of Florida for 28 years in the state legislature as a member of the Florida House of Representative and the Florida Senate. Lawson has fought for pay raises, benefits for state workers and vigorously strived to improve the quality of life for children and the elderly. Lawson garnered national attention as Chairman of the House Natural Resources Committee, where he authored one of the most important environmental laws in the country. This law created the largest state-funded land acquisition program in the United States. He also authored and passed the Apalachicola Bay Protection Act and was the primary sponsor of the Everglades Protection Act. Lawson also received national recognition for his efforts to pass the Rosewood Legislation, which provided reparations to the survivors of Florida’s Rosewood massacre in the 1930s. This month, U.S. Rep. Al Lawson voted to pass the Commission on the Social Status of Black Men and Boys Act, which will establish a 19-member commission to examine the social disparities that disproportionately affect black males in America. Commission members will review homicide rates, arrest and incarceration rates, poverty, violence, fatherhood, mentorship, drug abuse, death rates, disparate income and wealth levels, school performance in various grade levels and and health issues. The commission also will investigate potential civil rights violations affecting black men and boys.  Lawson married his college sweetheart Delores Brooks and they have two adult children, Alfred III and Shani. He is also the proud grandfather of four, Kobe, Samuel and Cameron Lawson, and Harlem Wilson.

Rhonda People Waters, Candidate Duval County Judge – Local elections are increasing in popularity as thought leaders, change agents and celebrities are using their influence to educate the masses. Dr. Mathew Knowles, father of megastar Beyonce Knowles-Carter has always had an eye for identifying talent and consistently champions women to greatness. That is why it comes as no surprise that he has endorsed candidate Rhonda Peoples Waters for Duval County Judge. As a fellow Fisk University graduate, Dr. Knowles has frequently spoken out about the changes needed in the African American community. The local judicial race in Jacksonville is historic as the public will be able to ELECT for the first time an African America Female Duval Judge. Born and raised in Selma, Alabama, Rhonda Peoples Waters roots run deep within the civil rights moment. Her  historic hometown boasts the location where civil rights legends changed the course of this nation. Rhonda has over 20 years of diverse law experience and has submitted an application to the Fourth Judicial Circuit Nominating Commission for appointment to the judicial bench 13 times. After the thorough review of the Judicial Nominating Commission, an extensive background check and substantial peer and judicial review, Rhonda’s name was sent up to the Governor’s office 10 times for a judicial appointment but was not appointed. Now she is putting her faith in the community she’s poured into for 20 years.   Attorney Rhonda People Waters She has owned her law practice for over 10 years. Rhonda is a proud graduate of Fisk University and a member of Alpha Kappa Alpha Sorority, Inc. She has been licensed to practice law by the Supreme Court of Florida since 1999, after graduating from the University of Florida School of Law where she studied under an academic scholarship.  Rhonda began her career in the Public Defender’s Office of Florida’s 4th Judicial Circuit. Rhonda Peoples Waters has tried over 75 non-jury and jury trials in her career. She was the lead trial counsel in more than half of those cases. Rhonda’s practice experience is very diverse, having participated in a wide range of criminal and civil cases. Rhonda brings to the bench varied experience, a heart for service and a hard work ethics.  Rhonda’s campaign continues to ask the hard questions that determine that Duval County is in dire need of women of color on the judicial bench. She also adamant that it is important to participate in local elections and why in 2020 there have only been three appointments of African American women to the bench and how this election will help change that scenario.