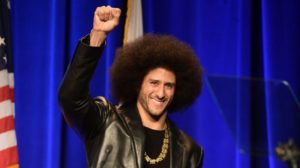 (The Grio) Colin Kaepernick is getting closer to completing his pledge to donate $1 million to different charities supporting social justice and fighting inequality.

For the last $100,000 of his campaign, Kaepernick announced that 10 different charities would each receive $10,000, according to ESPN. The first of those 10 charities announced was Silicon Valley De-Bug, a community organization in San Jose and Northern California’s South Bay.

The organization helps young people, immigrants, and low-wage workers. It’s expected that the donation will be used for legal expenses, bail money, and allowing families to visit loved ones in prison.

Kevin Durant and Steph Curry also step up to the plate

As part of Kaepernick’s pledge, celebrities have also stepped up to match his donations. For this $10,000, Kevin Durant matched the donation.That means Silicon Valley De-Bug got $20,000 to help bring awareness to immigrant rights as well as comfort to overlooked communities.

Durant’s teammate Steph Curry will also reportedly be getting involved, though he’s putting his $10,000 toward a different organization.

According to the San Jose Mercury News, Curry will be donating to United Playaz, a San Francisco organization dedicated to violence prevention and helping youth stay off the streets. It’s an organization that Curry has worked with in the past and one that he holds dear.

“I knew about Kaepernick’s Million Dollar Pledge almost a year ago, where he’s putting his money where his mouth is,” Curry told the San Francisco Chronicle. “I think the opportunity KD has and I have to bring that to the Bay Area, that opportunity to kind of rally around for what Kaepernick stands for and his mission to better communities through financial resources, that’s huge. It’s a small gesture that we all can do.”

Ever since Kaepernick made headlines for kneeling in protest during the national anthem, he has continued his activist streak off of the playing field, setting the bar high for other athletes and celebrities to get involved in their communities as well.