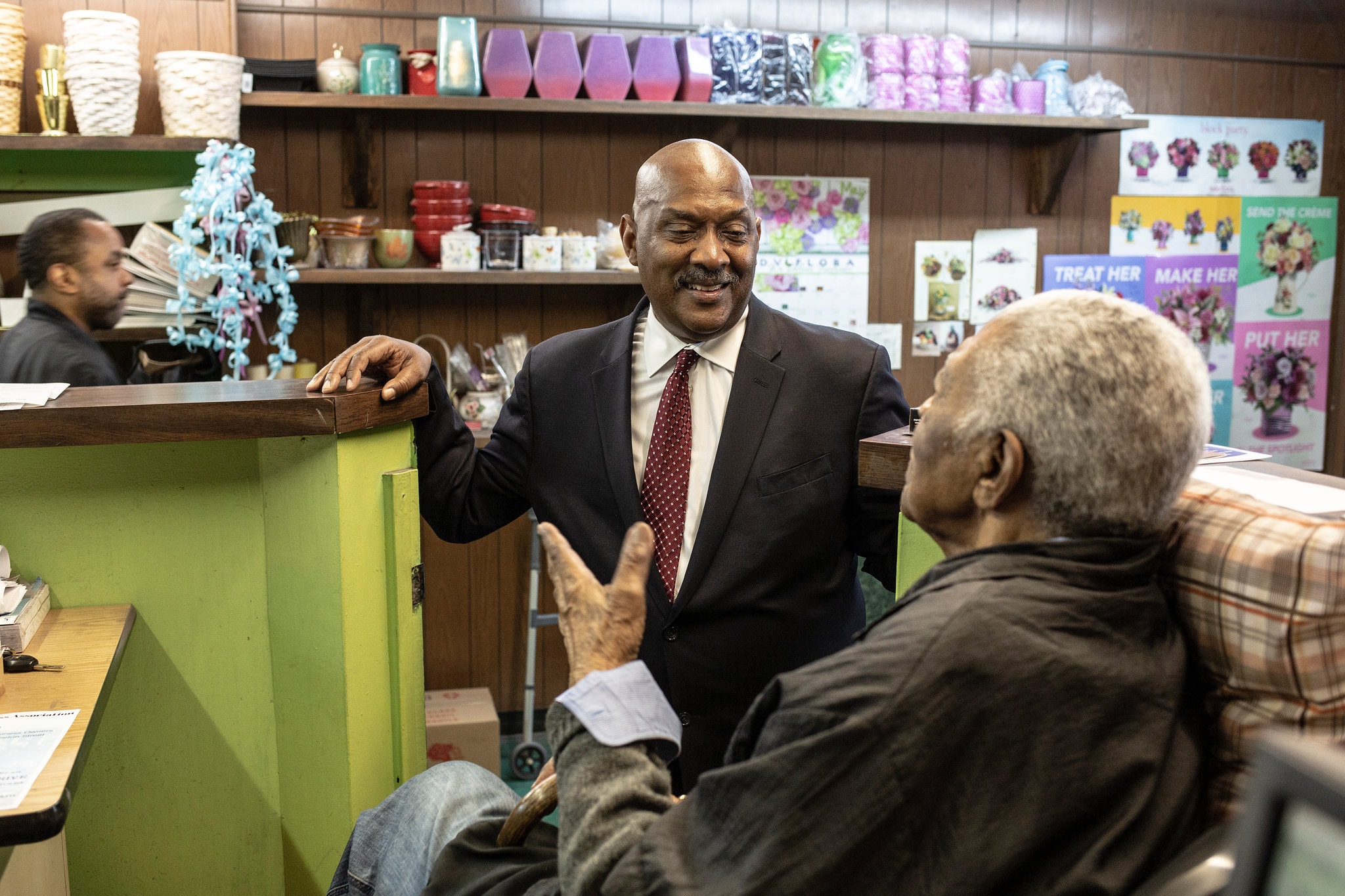 PHILADELPHIA — Moments after the special counsel, Robert S. Mueller III, wrapped up his appearance at the Justice Department on Wednesday, Representative Dwight Evans stepped out of his district office in a black working-class neighborhood here to visit with local business owners. They had one question on their minds: Why is President Trump still in office?

Mr. Evans, a Democrat who began calling for Mr. Trump to be impeached long before Mr. Mueller issued his report, was not surprised: “The issue that I hear constantly here is, ‘We sent you for one reason only: to get rid of the president, right? Why haven’t you gotten rid of him yet?’”

In cities around the country, black Democrats like Mr. Evans — and other House members who represent majority-black districts — are hearing much the same from their African-American constituents, as well as from white liberals who have moved into the nation’s urban core. Those views are translating into action on Capitol Hill, where Speaker Nancy Pelosi is under increasing pressure from her rank-and-file to hurry up her time frame for what many see as an inevitable impeachment inquiry.

A number of prominent African-American lawmakers, including Representative Maxine Waters of California, the powerful chairwoman of the House Financial Services Committee, are leading the charge to impeach the president. On Wednesday, after Mr. Mueller declined to clear Mr. Trump, three more signed on: Representatives Bennie Thompson of Mississippi, who is chairman of the Homeland Security Committee, and Danny K. Davis and Bobby L. Rush of Illinois. All are veteran Democrats.

Others, mindful of Ms. Pelosi’s call for caution, are pushing back on their own constituents and struggling to explain House Democrats’ go-slow approach.

“It’s probably safe to say that there are no Americans more ardently opposed to Trump than African-Americans,” said Eleanor Holmes Norton, the delegate to Congress from the District of Columbia, who argues that it is pointless to impeach Mr. Trump when the Republican-led Senate will not convict him. “There is such a huge dislike for this president that the first thing I get from them is to impeach him.”

Their “ardor is so great,” Ms. Norton said, that she wrote a Facebook post last month explaining the nuances of the impeachment process. She sees her Democratic colleagues getting “carried away by what their constituents are saying.”

“I remind them that we impeached a Democratic president, and he was more popular than ever,” she said, referring to Bill Clinton.

Here in Philadelphia, where African-Americans account for about 55 percent of Mr. Evans’s district, Mr. Trump evokes both fear and loathing in West Oak Lane, a leafy neighborhood of brick and stone houses in the northwest part of the city. This year, Mr. Evans brought Tom Steyer, the billionaire liberal activist who is pressing for impeachment, to the commercial strip of black-owned businesses along Ogontz Avenue.

I agreed with everything he said,” exclaimed Paulette Beale-Harris, 60, who owns a florist shop, referring to Mr. Steyer. “It’s time for Congress to do something. It’s time for them to stop being afraid to do what has to be done for the country.”

Seated in the back of the shop, Ms. Beale-Harris’s mother and sister nodded in agreement. But her father, Paul Beale Jr., 91, worried that impeaching the president would energize Mr. Trump’s base and help re-elect him.

“Pelosi doesn’t think it’s a good idea, and I have a lot of confidence in her,” Mr. Beale said. “If it’s going to hurt in the long run, I don’t think they should do it.”

Still, in one conversation after the next, the story was the same. “They’ve got to get him out of the way before he destroys this country,” said James Gaines, 66, a barber.

So strong is the sentiment against Mr. Trump that Art Haywood, an African-American state senator who represents this area, has introduced a resolution in the Pennsylvania General Assembly calling for the president’s impeachment. Last week, he held a town-hall-style meeting to rally public support; in an interview, Mr. Haywood compared House Democrats to Neville Chamberlain, the British prime minister who sought to avoid war with Hitler.

“This appeasement policy of Nancy Pelosi is a tremendous mistake,” Mr. Haywood said. “The risks to our nation are bigger than the risks to the Democratic Party.”

Black voters turned out in droves to help elect Barack Obama, and younger African-American voters were part of “a huge surge group for Democrats” in the 2018 midterms, motivated by their antipathy toward the president, said Cornell Belcher, a Democratic pollster and expert in the African-American vote. A recent poll by Quinnipiac Universityfound that 87 percent of African-Americans disapproved of Mr. Trump’s performance as president, compared with 63 percent of Hispanics and 48 percent of whites.

Their disdain goes far beyond his policies; they view him as a racist and an “existential threat,” Mr. Belcher said. Many still mock his 2016 plea for their support: “What the hell do you have to lose?”

And those voters’ representatives are taking up their cause — not only African-American House members like Mr. Evans but others who represent substantial black populations, like Alexandria Ocasio-Cortez of New York, who is of Puerto Rican descent, Rashida Tlaib of Michigan, who is Palestinian-American, and Steve Cohen of Tennessee, who is white but whose Memphis district is two-thirds black.

“Among activists, the chattering class, it’s a real priority,” Mr. Belcher said. “Among Joe Blow African-American voter who does vote regularly but is not a political activist, does he want Donald Trump removed from office? Yes. Is he for impeachment? Sure he is. Is it his top priority? No.”

The Congressional Black Caucus has taken no official position on impeachment; its chairwoman, Representative Karen Bass, Democrat of California, said she was organizing a formal “educational session” for its members once they returned from Memorial Day recess next week. On Friday evening, 10 members of the caucus will convene a town-hall-style meeting in Brooklyn, where Ms. Bass said impeachment was sure to come up.

Last week, another caucus member, Representative Sheila Jackson Lee of Texas, introduced a resolution that would authorize the House Judiciary Committee to “investigate whether sufficient grounds exist” to open an impeachment inquiry. That is one step short of an outright call for impeachment. But last year, Ms. Jackson Lee voted in favor of an impeachment resolution introduced by another black lawmaker, Representative Al Green of Texas, and she said her view had not changed.

Mr. Evans, 65, who served in the state legislature for 36 years before being elected to Congress in 2016, also voted for the Green resolution; he believes Mr. Trump abused his power when he fired both Sally Q. Yates, the acting attorney general, and James B. Comey, the F.B.I. director, early in his term.

If black voters are passionate about getting rid of Mr. Trump, liberal whites “are even more rabid,” he said. That was evident in another corner of his district, the gentrifying bohemian neighborhood of Cedar Park, where Sandy DeVito, 31, a fiction writer and barista, was shopping Wednesday for a lemon-ginger echinacea drink at a food co-op.

Mr. Evans said the report, which detailed at least 10 instances of possible obstruction of justice by the president, “only confirmed what I already knew.” In the weeks since its release, as Mr. Trump has instructed government officials to refuse Congress’s requests for witnesses and documents, Mr. Evans’s outrage has only grown. And as a black man, he takes particular umbrage at what he regards as the hypocrisy of the criminal justice system as it relates to the president.

“If anybody in this district were to see a subpoena and act the way he acts,” Mr. Evans said, “they’d be in jail.”