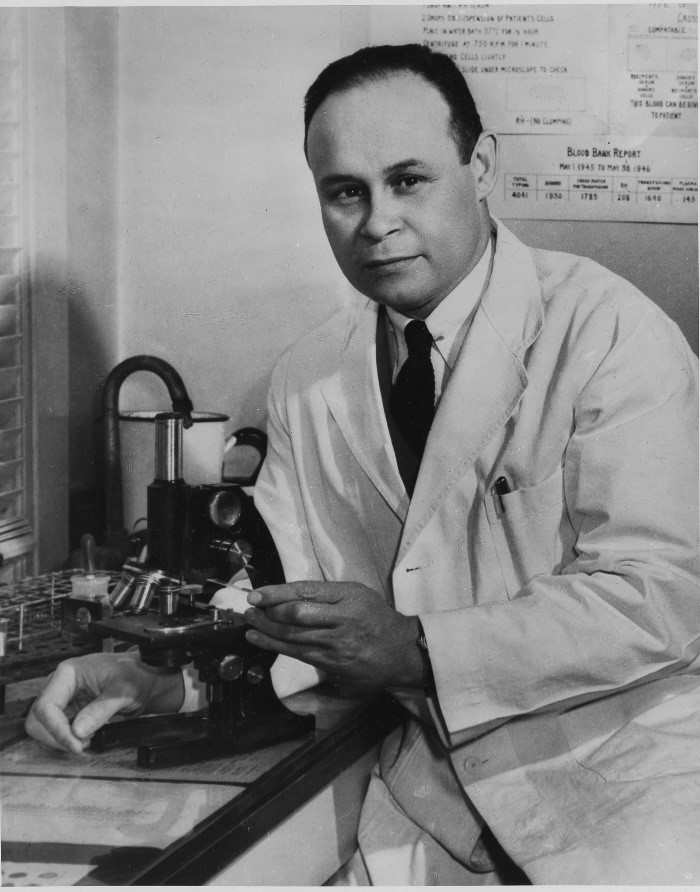 Dr. Charles Drew, the first African-American to receive a doctorate degree from Columbia University, began his blood bank research in 1938 at Columbia University’s Presbyterian Hospital, where he developed a method to increase the shelf life of blood plasma. In 1940, Drew was chosen to lead the “Blood for Britain” campaign during World War II that saved thousands of soldiers’ lives by collecting and transporting blood plasma.

Plasma is the yellowish liquid portion of blood that’s left over after cells and platelets have been filtered out. According to the American Red Cross, nearly 21 million blood products are transfused each year.

During the COVID-19 pandemic, medical professionals have used convalescent plasma — plasma removed from patients who previously had COVID-19 that contains antibodies– as an experimental treatment for new patients with the disease. Clinical trials that examine plasma’s effectiveness are still ongoing, and results so far are mixed.

But Drew’s daughter, Dr. Charlene Drew Jarvis, said she appreciates knowing that her father’s work could be critical to saving lives during this pandemic.

“It’s really exciting when we began to understand that the antibodies in the plasma were antibodies that were important in the treatment of COVID-19,” she said. “We understood the reverberation of the work, which he did early on in the 1940s.”

Drew worked with the American Red Cross but resigned in the early 1940s as blood banks became segregated, separating the blood of Black patients from that of white patients. As Jarvis explains, “My father said there was absolutely no scientific reason for blood transfusions not to occur across races.”

In 1950, Drew died in a car accident on the way to a conference at age 45.  His early death was devastating to his family and the medical community, and Jarvis became a neuroscientist to carry on her father’s legacy in a scientific field. She’s worked at the National Institute of Mental Health, served on the city council in Washington D.C., and was the president of Southeastern University.

Jarvis now works with Red Cross chapters to educate people about the importance of blood donations. She spoke with the PBS Newshour about how her father’s legacy and how his work has shaped the scientific response to the COVID-19 pandemic.

The conversation has been edited for length and clarity.

Tell me a little about your father.

We knew him as a father, and my dad was strict. He was loving. He had the same mantra: “Excellence of performance will overcome any artificial barriers.” So I remember times at eight years old when I was sitting up at the dining room table with him going over my geography or some other course. My dad was a saxophonist. He loved opera. He was a carpenter. He was just a man for all seasons. He had such talent, such skill, such caring, such breadth.

Your father’s sister, your aunt, died of the flu during the 1918 pandemic. What was that loss like for him?

My father’s sister, Elsie, died in 1918 from the flu epidemic. As she was the second child, she was my father’s partner, and her death was devastating to him. He was born in 1904. She was born very shortly thereafter. So this is a teenager who was devastated by it. The result of that was that my father decided that he wanted to be in medicine. That became his drive.

Your father resigned from his role with the American Red Cross when they began to segregate blood banks. How did segregation impact access to health care for Black Americans?

It continues to exacerbate the problems of recovery from the pandemic, both getting the virus and recovering from the virus. There is just a two-tiered system of health care delivery. Why is that? There are not enough people of color, men and women of color, who are physicians in African American communities.

During the COVID-19 pandemic, doctors have used blood plasma to try to treat COVID-19 patients. How do you think your father’s research has impacted this pandemic?

Many of the inequities your father opposed in the health care system still exist today. What do you think he would say if he were still here?

I can almost quote from one of the paragraphs that I found of my father, which said that the single most important medical problem in this country was the inadequate treatment of Negros in the country in terms of access to health care delivery system. He said that in 1940. This is now 2021. The issue is the same.