By Senior Editor Leslie Quander Wooldridge – (Source www.sistersletter.com) In her new book, the TV and radio personality and former advertising executive reveals why our goals and stories are so important — and how we can respond to trials.

Raised in Harlem, Smith endured bullying as a child and says she was misunderstood at times. She rose above the issues and forged a high-profile career in magazine advertising, where she worked for titles like Vibe and Rolling Stone and found herself in glitzy cities and luxury fashion houses. Now she’s the author of a new book about her experiences — Bevelations: Lessons From a Mutha, Auntie, Bestie.

But Smith, now 54, didn’t get here in a flash. When she was at the top of her advertising game — and we mean the tip top, which featured luxury gifts from design houses like Gucci and Prada, high-level connections and a covetable expense account — she pivoted. Quit her magazine job at age 38. And pursued her dream of being on TV, which led to her work on Bravo’s Fashion Queens and Page Six TV.

Here she talks with Sisters about why it’s never too late to pursue our dreams, and how she’s learned to embrace her childhood essence, even as she’s made her mark as a woman with influence. 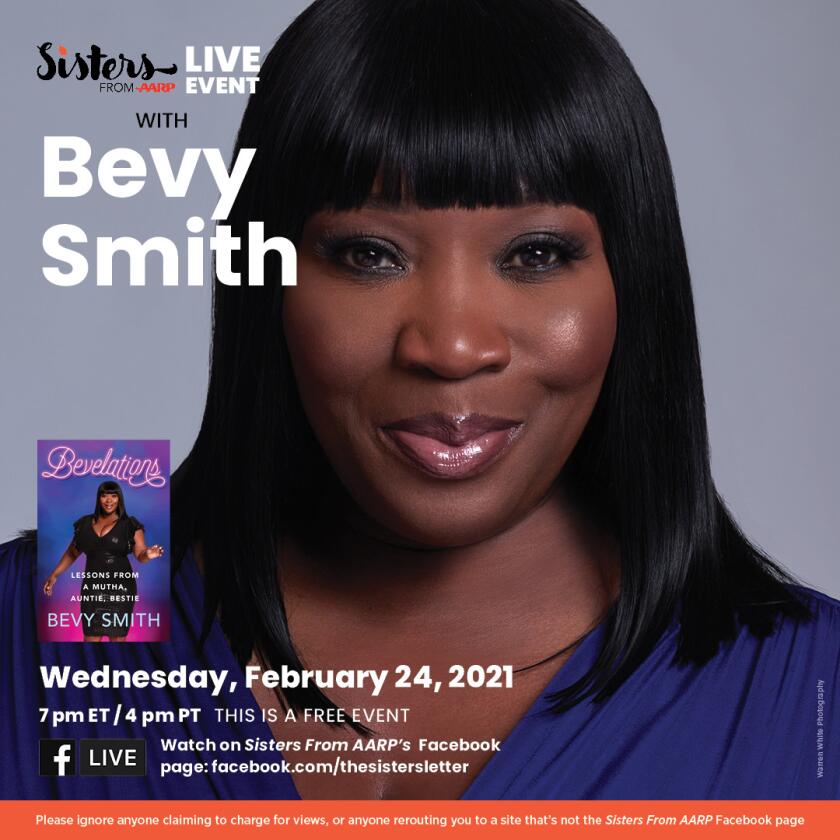 On how we can approach uncertainty

We have to learn that tomorrow’s not promised. Everything is subject to change. We have to be a little more nimble. I know, of course, it’s a lot of people listening to us that probably have had to change their entire careers, not because they wanted to, but because perhaps their jobs were closed, they no longer have those positions. You know [now] many people are out of work in our country — tens of millions. And so I think that what we need to do is we have to take these opportunities to see these trials and tribulations, and we have to turn them into opportunities.

On the importance of telling your own story

People need to hear stories of folks who look like them. Folks that feel like someone that they know. That’s the reason why the book is called Bevelations: Lessons From a Mutha, Auntie, Bestie, because I’m mother to my gay sons, I am auntie to the young women in my world that are under 35, 40 years old. And so the pandemic and the lack of TV opportunities has allowed me to get back into public speaking. Although we can’t do live events, we do virtual events, and it’s been very beneficial, not just from a financial point of view […] but more importantly, it’s been very beneficial to me from a spiritual space.

At core, I’m little brown Bevy. Little brown Bevy was pushed to the side because little brown Bevy at the time was the one who was being bullied. So at the age of 14, when I went to a different high school than my bullies, I was able to change my life for the first time. And I put little brown Bevy away on a shelf. And I didn’t revisit her until I was, really honestly, probably 38 years old. And that was after I’d done all the introspective and self-awareness work. So I found out who I was at my core. One of the things that I really didn’t like was the perception of me being someone who’s so tough that she doesn’t really have feelings and that she can never be hurt. How I [want] to be perceived is how I really am, which is a generous, kind, empathetic, curious, adventurous person. And I think I’ve done a really good job at creating and bringing that person, little brown Bevy, to the forefront.

On battling COVID and saying farewell to her father
I got COVID very early on, with battling being sick myself and not knowing what was going to happen. And then of course my dad getting sick [at a nursing home] and then in a rapid succession actually passing away. And that was nothing but faith that saw me through. And it’s been tough because we’re a very close family. My mom is still with us. She’s 92. So now we have to keep her safe. And it’s faith that’s allowing me to believe that we will be able to keep my mother safe. It’s a wonderful thing. I took a little trip to clear my head and I had been asking God and praying that my dad would come to me in a dream. And when I got back from my little trip, my daddy came to me in a dream for the first time ever. And it was so good. It was so good to see my dad.

On being happily single yet open to love

I want women that are reading that maybe are divorced [and] women like myself who have never been married […] to know that who you are without a man is who you choose to be. You have the power to create the life that you want. In the book I always talk about how I do want to be in a big, bold, loving, divine relationship. But I will tell you this, my life right now is cake, and cake without any icing is incredibly good and very sweet. And when I meet my guy […] he’ll just make it a little sweeter, but he won’t have to define me. He won’t have to complete me. He won’t have to build me up because when I meet him, I will come to him fully formed and ready to be a partner versus him having to be my caregiver. He will just be a little icing.

On why it’s never too late to dream
What I want people to take away from this book […] is that it gets greater later. There’s no such thing as too late. So I look at my life now at the age of 54, and I succeeded in doing a lot of what I set out to do when I was 38 years old. And now at 54, I’m moving into another chapter of my life. So I’ve been successful with doing TV and doing radio and being a writer. And now I’m going to move into production and be an architecture curator and different things. I have a lot of passions and a lot of interests, and before I close my eyes, I’m going to try my darndest to actually explore everything that I’m interested in.

ABOUT THE AUTHOR
Senior Editor Leslie Quander Wooldridge
Leslie Quander Wooldridge is a writer, editor, speaker, and coach whose work has reached tens of millions of readers. She is the senior editor of Sisters From AARP and has covered everything from health and wellness to relationships and personal finance—with stories also in outlets including Business Insider, The Washington Post, Men’s Health, and AARP the Magazine. Connect with her on social media @lesliequander and at www.lesliequander.com.
Real Talk for Real Sisters

Sign up to receive our free weekly newsletter every Tuesday.