The annual breakfast energized participants to celebrate Dr. King’s dream and his legacy. While handing out awards, BMCD President Rev. Robert LeCount addressed the attendees and praised the work of Dr. King during the civil rights movement. The breakfast was followed by the 20th annul MLK service celebration.

“We have to continue to get the word out to the people about the importance of voting and the ultimate sacrifice that was made so we could vote and not take our vote for granted, because one vote could make the difference in who will serve us best,” said NAACP President Isaiah Rumlin who motivated the audience. Other pastors in attendance who roused the spirit of Dr. King’s legacy included Reverend Marvin Zanders, II, Reverend Christopher McKee, Jr. and Rev. James Sampson. Pastor of First Baptist Church of Oakland. This year’s awardees included: Northside Coalition of Jacksonville (Social Justice Award); Reverend D.E. Banks (Drum Major for Peace Award); Dinah LeCount (Humanitarian Award); District 9 City Councilman Garrett Dennis (Leadership Award); City Council President Anna Brosche (Trailblazer Award). Pictured is Social Justice Awardees members of the Northside Coalition of Jacksonville. 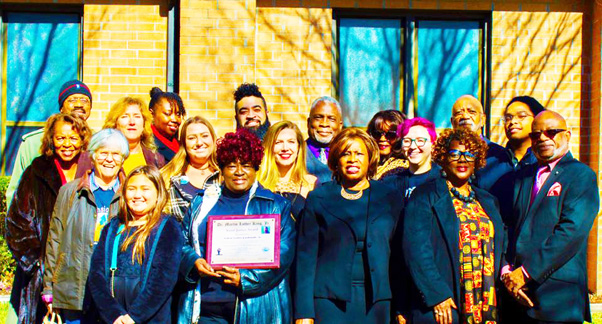