By Lynn Jones – A group of concerned businessmen along with City Councilman Garret Dennis held a press conference at Edward Waters College this week to address the recent rash of crime and violence that has plagued the city over the last two weeks.

Recent killings include three young men shot during a drive-by incident near the St. John’s Town Center and the recent shooting of a 14-year old student on Rutledge Pearson Dr. Currently, homicides in Jacksonville is up at least 48 for the year.

“We’ve been working tireless in this community to combat these gangs, disputes and drive by’s,” said Diallo Sekou of the Kemetic Empire. “We want these young men to know that they have someone to talk to. We grew up in these streets. Conflict resolution should come first,”  he added.

Since 2016, The Kemetic Empire has worked to create a strong and consistent presence in the community serving under the mantra, “One street at a time,” as their strategy.

The group of concerned men also included former NFL football player Jabari Gaffney and several candidates for Jacksonville City Council. The men also discussed next steps to bring the young men together to diffuse fighting in the streets. 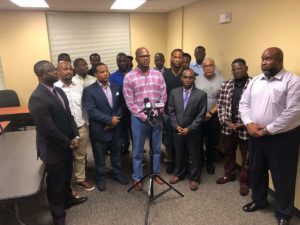