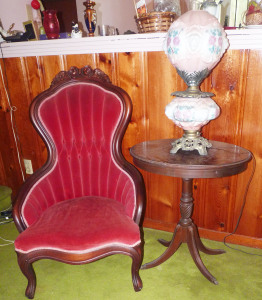 Sallye B. Mathis, a retired educator and civic activist became one of two Black women elected to the old City Council in 1967, along with Mary L. Singleton, becoming the first Blacks to do so in 60 years. As a civil rights activist in the 60’s, Ms. Mathis led the charge to change the city’s stance on civil rights and equality for African Americans. Sallye was also on the front line with local author Rodney Hurst as they converged on Woolworths in downtown Jacksonville for a day of unrest known as “Ax Handle Sunday”. Until her death in 1982 at the age of 70, she advocated for the citizens in the community to advocate funds for housing and job opportunities.

Since her death in 1982, Sallye’s niece, author Brooke Stephens, a 20-year veteran of Wall Street who started her financial career as an international trade officer in West Africa with Chase became Sallye’s power of attorney. Brooke currently holds in her hands her estate items that consist of historical artifacts, furniture, important papers left behind form the city council, law books, bookcases, book shelves, office furniture, personal furniture, chairs, sofa, sideboard and dining set, Bible, books and personal china, tea set, glassware, lamps and plaques and award statements given to her at various times throughout her career. Other items include the City Council business records, photos of her graduation, marriage, civil rights letters and documents which will be donated to the Public Library African-American research collection.

A portion of the proceeds from this sale will be donated to local non-profit organizations which were supported by Mrs. Mathis. The event will be held for one-day only, Sunday, April 16th, at the home of the late Grace Solomon, the sister of Mrs. Mathis and Brooke’s mom. For more info call (904) 764-4429.
Photos of estate items will be listed on internet at: https://www.estatesales.net/FL/Jacksonville/32208.