You likely heard about “The Negro Motorist Green Book,” Victor Hugo Green’s guide to services and places that were friendly to Black travelers at a time when discrimination was rampant and Blacks didn’t have the luxury of eating or staying everywhere, and also from the 2019 Best Picture Academy Award winning film “Green Book.” For today’s globe-trotting Black travelers, there’s the newly released “The ABC Travel Greenbook” by Martinique Lewis.

Lewis, who is a diversity in travel consultant, creative lead of Nomadness Travel Tribe, and president of the Black Travel Alliance, has compiled resources for Black travelers to connect with Black communities in every city and country in six out of seven continents. You’ll have information on Black-owned businesses like restaurants, tour and transportation companies among others, as well as Black neighborhoods and online communities in every country. Lewis hopes “The ABC Travel Greenbook” will amplify Black-owned businesses previously left out of major travel publications so that they too are included in press trip itineraries, get attention for their own television segments, and can be starred as a destination for travelers. Another goal is to strengthen local economies and circulate Black dollars.

Lewis shared how “The ABC Travel Greenbook” came to be. What inspired her? “I realized I was having these experiences abroad seeing people who looked like me in places I’d never think. As an avid traveler, I knew if I didn’t know a lot, others didn’t. So I wanted to create a solution to the problem, and that’s how I was able to create ‘The ABC Travel Greenbook.’”

She spent the last two years working on the first edition. She says this will be the work of a lifetime as she’s far from finished. “I was motivated to do research some days and when I felt defeated because of things like language barriers. But once COVID-19 hit and the unfortunate death of George Floyd and everyone saying Black Lives Matter, I knew it was time to complete it and get it to the world,” says Lewis.

How did she gather information from around the globe? Some places she traveled to. Others her travel community traveled to. She got inside information from people in the travel industry on the ground, hundreds of Facebook groups dedicated to Black expats living around the world, and Instagram and Facebook algorithms that linked her to like-minded businesses once she friended or liked a company. While 95% of the book is by her, she had some big assists, namely “Sayuri in Brazil who is an Afro Brazilian tour operator that helped tremendously. And then one girl in Nomadness Tribe created a Google map with all the Black history landmarks in America and I used her Google doc,” says Lewis.

For sure, like most journeys, there were bumpy roads like language barriers in countries where English isn’t spoken. “I had to know the correct words to look up afro hair salons and Black restaurants. Additionally once I got to the continent of Africa and all of the Caribbean, I quickly came to realize that whatever country colonized those places are the ones who own those businesses. Africa businesses related to the travel industry are 90% owned by foreigners and white people,” says Lewis. 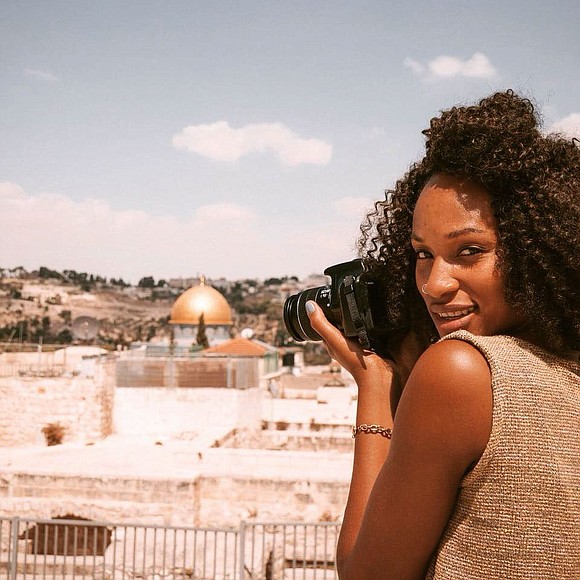 She explains, “It was heart-wrenching. I felt like a fraud. Here I am with this guidebook and I can barely lead you to any Black-owned businesses on the continent where the most Black people reside. I was crushed, but then I realized this is volume one, and my community will help me fill out more of these places by next year when volume two comes out. I realized that this is an opportunity to shine light on the injustices that still happen all over Africa, and for us natives of Africa to invest in the continent and buy it back!”

She’s feeling good about getting the first part of the book completed. What’s the measuring stick she’s using for success? “When it’s on Barack Obama’s book list and Oprah’s ultimate Christmas gift guide. And also when I am traveling and I see someone with the book, using it to patronize a Black-owned business in Israel. When travel publications use it to tell Black stories in their travel magazines and of course when I see it in airports worldwide. I think big,” she laughs.

Her mission is clear, “I want Black people to travel to these places and experience that feeling of joy knowing there’s a community of people that looks like them. I want them to celebrate that, connect with that, and tell someone else. I want non-Blacks to be aware that Black people are everywhere! And yes because of slavery, so acknowledge how horrific it was for Black people to be taken from their land and then put in a place where they were forced to work and accept new customs, even though history books don’t say it, and museums hide it. No, it was real, and you gone learn today! But also for them to know slavery isn’t the only reason we are in certain places. We were explorers too!”

While discrimination isn’t as blatant as it was in the days when travelers needed “The Negro Motorist Green Book,” remnants remain. Lewis chooses to accentuate the positive. “Every experience is a good one, because it teaches me something about myself that I didn’t know.”

Her best advice for safe travel while Black? “Stay alert and aware at all times.”

For more visit the original article at: http://amsterdamnews.com/news/2020/sep/10/updated-green-book-todays-black-travelers/?page=2