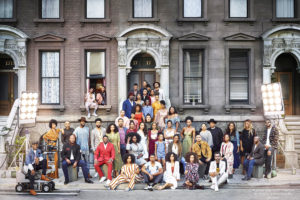 Streaming giant Netflix re-imagined the iconic “A Great Day in Harlem” photo that captured 57 notable jazz musicians in front of a Harlem brownstone. XXL Magazine did the same with their “A Great Day In Hip-Hop” cover in 1999 featuring artists like Run of Run DMC, Busta Rhymes and other hip-hop notables of the era.

Netflix’s homage to the famous photo features 47 creative and talented artists behind 20+ original shows/films/documentaries. A 60-second video of the event premiered during the BET Awards.

“It was a pretty magical couple of hours,” Duke said in the official release. “All these amazingly talented, beautiful individuals in one space being supportive and just looking stunning together, all here to pull off this one take wonder! Alfre Woodard even lead everyone in an epic rendition of ‘Lift Every Voice and Sing’ before we started shooting. It was beautiful, and in a flash it was over. It was probably the most overwhelming two hours of my career. I was just so happy to be a part of history.”