Finding a Priceless Pearl in a Sea of Pandemic Problems Dan Fisher had climbed the corporate ladder to a job he enjoyed and was making more money than he ever imagined. He was the VP/GM of a large division that oversaw more than $1.2 billion in annual revenue. But, after studying the Bible, Fisher says he felt the heavy demands of his career left him longing for more time for spiritual pursuits. “Leaving a well-paying job that really was a dream job was a test of faith,” he admits.

Now living in Tampa, Florida as a full-time minister, Fisher says he has no regrets. “My wife and I have a much closer relationship with each other and with our creator.”

Fisher is not alone. In this time of pandemic when many have lost the things they thought were of the highest value, some have made their spirituality a priority. They feel like the merchant in an ancient parable who found a pearl of such great worth that he sold everything he had to obtain it.

“Have You Found a ‘Pearl of High Value’?” is the theme of a global virtual event to which Jehovah’s Witnesses are inviting the community in March. In the Gospel account, Jesus Christ used the parable of the pearl to illustrate the motivating value of  the truth about God’s Kingdom, the solution to mankind’s problems.

This free 30-minute program unlocks the meaning of that parable, explaining what the Kingdom of the heavens is and how that valuable knowledge can help us attain peace
and a sense of security even now.

“The pandemic changed our lives within weeks, bringing the economic, educational, and social systems to their knees,” said Robert Hendriks, U.S. spokesman for Jehovah’s Witnesses. “What has not changed is spirituality and its powerful effect on people’s lives.”

That proved true for Kaya Madison, who was raised Catholic but became agnostic when she couldn’t find answers to the myriad of questions she had about God. “I was really searching,” she said.

Early in the pandemic, a co-worker prompted the 23-year-old college student from San Diego to read an article about the four horsemen of the Apocalypse on jw.org, the official website of Jehovah’s Witnesses. As an aspiring writer who loved to pen the mythological and magical, Madison found the horsemen intriguing—from the charging white horse with its royal rider to the pale sickly horse saddled by a skeleton.

Megan Hilario saw too how COVID-19 had crushed the dreams of many as well as their sense of security. Hilario loved art and was offered a full-ride scholarship at an Ivy League University to study art. But as a Jehovah’s Witness, and someone who had studied the Bible all her life, she knew in her heart that she wanted to devote her time to helping others. “If I had gotten a better education, only myself and my immediate family would have benefitted,” says Hilario. “But by sharing Bible truths you’re able to touch so many peoples’ lives.

Hilario says she is at peace because of the hope the Bible promises. “There’s a sense of tranquility that you have because there’s no worry for the future.”

The presentation about the valuable pearl will be held on select dates during the first three weeks of March through local congregations of Jehovah’s Witnesses. It preludes another event that the Witnesses are also inviting people to attend: the annual observance of the Memorial of Jesus Christ’s death on March 27.

“We invite anyone searching for peace, security, comfort and hope to attend,” Hendriks said. “This special talk and the Memorial of Jesus Christ’s death will show people how they can obtain something priceless that will make their lives better, not only now, but also in the future, even forever.”

Due to the pandemic, congregations around the world will host both events virtually. There are no fees to attend, and no registration is required.

To learn more about how to attend locally, ask one of Jehovah’s Witnesses or visit www.jw.org. 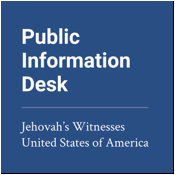