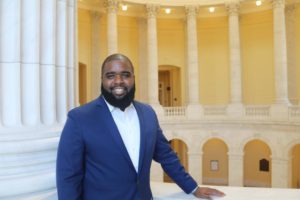 Philadelphia. Pa.—When Vince Evans entered the world of politics, he was a teenager starting a week-long stint as a page in the Florida Senate. His fascination with this new world took hold, and the young man from Green Cove Springs, Florida began a journey that would secure him a top presidential campaign post. The thirty-one-year-old was hired in July as the Southern Political Director to former Vice President Joe Biden’s presidential campaign

“I was a Senate Page in high school,” Evans said. “I attended Florida A&M University, and while there, I interned for then-Senate Democratic Leader Al Lawson. At FAMU, Evans was the go-to guy for winning campaigns. Candidates for student body president and student senate sought him out. His strategies brought victory to many talented Rattler leaders. “When I graduated from FAMU, I ended up going back to work for the Florida Senate Democratic Office.”

Evans was able to put his passion for public service to work. Engaging and articulate, he brought energy and enthusiasm to whatever he was assigned.  His experience includes working for a Tallahassee City Commissioner before following U.S. Rep. Lawson to the nation’s capital. Evans also worked for Hilary Clinton’s 2016 Presidential Campaign doing African-American outreach in North Florida. He also served as a political director for 2018 gubernatorial candidate Andrew Gillum.

The Biden campaign’s focus on outreach to minorities and women is critically important in Evans region of responsibilities. The area includes 13 states among them Florida, Georgia, Alabama, Texas, and the Carolinas. Florida, his stomping ground, is the prized battleground that delivers the White House. And the chaotic nature of campaigns makes him a perfect fit because of his ability to mobilize, reverse course and take corrective action quickly.

“Vice President Joe Biden is the candidate I believe should be the next President of the United States,” Evans said. “Vice President Biden and I share the same values, and we believe strongly the nation needs a new course.”

Evans said having “real talk” with the voters helps explain the mission of Biden’s campaign.

“I have honest conversations with folks,” Evans said. “Sometimes they are tough discussions; folks are sometimes torn between two or more candidates. More often than not, folks want you to level with them and present the facts and eliminate the fluff.”

“As the Southern Political Director, Vince adds a lot to the campaign,” Marshall said. “We both have been in politics for a while, along with strong Capitol Hill experience and relationships. We are glad to have Vince a part of Team Biden, especially since he is a native of Florida.”

“I always tell folks that the Vice President sets himself apart from the other Democratic nominees based on his track record of addressing concerns with healthcare, the environment, violence against women, LGBTQ issues, his long history on civil rights that’s why he entered public service as a public defender,” Evans said. “This is what the Vice President says all the time and I echo him ‘we can’t take four years of Donald Trump but eight years of him might fundamentally alter who we are as a nation, the risks are too high right now.’”

Maintaining one’s sanity is essential in any political campaign, especially a presidential campaign. Evans said prayer is one of his strategies.

“I stay prayed up,” Evans said. “Once I moved to headquarters in Philadelphia, I had to find a church to attend because my faith guides me in everything I do. I also have to make time for self-care and take a whole lot of Emergen-C.”

“Campaigns can be grueling work,” Evans said. “But we know there’s an end date all of our work pays off with a Biden victory.”

Evans has the qualities needed to manage the chaotic world of campaigns: the ability to mobilize, reverse course, and take corrective action quickly.