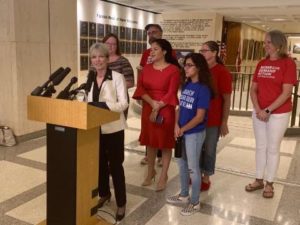 Tallahassee, Fl—-Attorney General Ashley Moody’s is not telling the truth about a 2020 proposed constitutional amendment that prevents the possession of assault weapons, according to Florida Democrats and gun safety advocates. Moody, in her effort to keep the initiative off the ballot says, the ballot language is “clearly and conclusively defective.” The Florida Democratic Party, Representative Cindy Polo (D-103), the Florida Coalition to Prevent Gun Violence and March for Our lives told capital reporters that Moody was not telling the truth about the proposal.

Terrie Rizzo, Florida Democratic Party Chair said it’s clear that Moody wants to deprive Floridians of the right to protect their families. First by attempting to keep the constitutional amendment off the ballot and calling it “deceitful and misleading,” all this just days after the El Paso, Texas and Dayton, Ohio mass shootings.

Representative Cindy Polo said it is time to end bad behaviors by elected officials. “Ultimately, what Attorney General Moody is doing is deceitful and misleading,” Rep. Polo said. “The same words she has used to describe this voter initiative is exactly what elected officials in Tallahassee, specifically the Republican Party have continued to do to the voters.”

As of Thursday, Sept. 19 the proposed constitutional amendment had 106,333 valid petition signatures, according to the Florida Division of Elections website.

“This is another reminder to all of our community members if you are just as upset as many of us are with either the inaction or the impeding of your will take action, keep memory, keep notes of this so we can start putting an end to these kinds of elected officials that are in office,” Rep. Polo said. “It’s time that we not have a short memory and hold them accountable for what they are doing.”

Supporters of the measure said having a state ban on semi-automatic guns would end mass shootings seen in previous years such as the Pulse Nightclub and Parkland School tragedies. “This measure is so important and we’ve been impeded every step of the way,” said Karen Mazzola, Florida Coalition to Prevent Gun Violence. “It is impossible to overstate the anguish and the grief suffered by hundreds of families and friends and the pain and injuries both physical and mental stemming from all of these tragic events. The Coalition to Prevent Gun Violence strongly urges support of the ban.”

The ballot initiative clearly calls for common-sense gun safety and supporters say Floridians should have the ability to cast their ballot up or down.