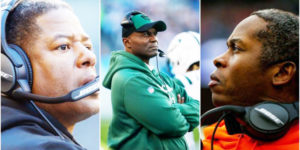 The firing of Wilks in Arizona after only one season won particular attention. In the NFL, many coaches fail in their first year yet remain employed. Though the NFL has made great improvements in hiring Black head coaches over the last twenty years as the result the Rooney Rule, the recent firings were sobering. The Rooney Rule mandates that NFL teams interview at last one minority candidate before making their final hiring decision.

Professional football is dominated by African American players, as over 70 percent of them are African American. Typically, players go on to become coaches but the overwhelming numbers on the field have yet to surface among the coaching ranks in the NFL. Many see the recent firings as ironic progress: There was a time when the firing of five African American coaches would have been inconceivable because there were none on the sidelines. However, thirty percent of NFL coaches were Black before the firings this season.

Though one of the coaches fired, Hue Jackson, has one of the worst win/loss records in the modern NFL, many point to the fact that there haven’t been enough hired over a long enough time to conclude that the hiring and firing pattern is biased one way or the other. Still others say that management above the head coaching position is actually often to blame for failing results and losing records.

“Despite owning one of the league’s worst rosters, the Cardinals fired their coach anyway, as Bidwill scapegoated Wilks — who became only the 10th coach to be fired after only one season since 2000 — for the franchise’s failures,” wrote NFL writer for Yahoo News, Terez Paylor, regarding Wilks’ firing.

Writer Dave Zirin, who writes about race and sports often, wrote, “In a league 70% African American, there are now two (!) Black head coaches after today’s (firings). Shameful numbers. Failure of a Rooney Rule without teeth and owners who will nearly always bend towards whiteness.”

“Not a good look for diversity today in the NFL. In 2006, when Commissioner Goodell was hired, there were seven minority coaches and four minority general managers. Today there are three minority HCs and 1 minority GM after Ozzie retires,” wrote Jim Trotter.

The regular season in the NFL ended on December 30. As more changes are made over the off season there is likely to be more Black head coaches added. But for now, the debate on the numbers will focus on the recent firing and whether those dismissed will find employment elsewhere for 2019.