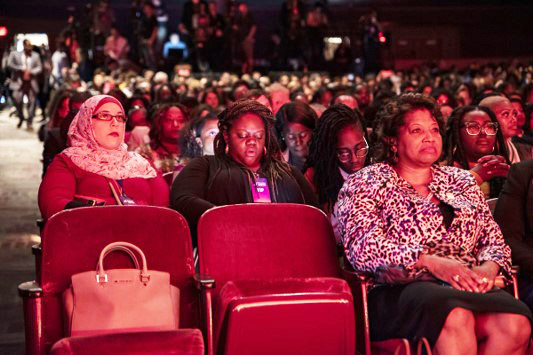 They’re a key voting bloc — and they want candidates to present policies that will help them and their communities.

Women of color are poised to be a particularly powerful voting bloc in the 2020 Democratic primary — one that deserves far more attention, according to political strategists and activists.

Members of this group have proven to be loyal Democratic voters and have helped deliver key wins in recent elections in Virginia and Alabama. And one year before an election in which issues of race and identity are expected to play a significant role, strong support from women of color — particularly black women — could be the difference between winning and losing for any of the 20 Democratic candidates who are currently vying for the presidential nomination.

But many candidates still seem like they don’t have a specific plan for winning over this diverse group, which includes black, Latina, and Native American women, among others. This was most recently on display at the She the People Presidential Forum, an April 2019 event billed as the first presidential candidate forum to focus exclusively on women of color. While Sens. Elizabeth Warren and Kamala Harris were able to bring policy specifics and proposals to the table on issues like black maternal mortality and criminal justice reform, other candidates faltered when asked to discuss how their plans would benefit women of color in particular.

It suggests that in the coming months, 2020 candidates will need to work harder to find ways to connect with black and brown women. If they fail, candidates may find themselves struggling to gain traction in a crowded field.

“In the primary, we’re not looking to hold our noses and vote for a candidate we don’t believe in,” says Aimee Allison, a black woman and the founder and president of She the People, an organization focused on boosting the voice of women of color in politics and the convener of the April presidential forum. “And inspiring women of color is going to be crucial for any candidate who wants to be successful.”

Women of color are estimated to make up roughly 20 percent of the Democratic electorate, and comprise 25 percent of the population in key swing states like Georgia, Florida, Arizona, and South Carolina. While women of color, particularly black women, have played crucial roles in elections for years, it wasn’t until the 2012 presidential election, which saw women of color push the overall women’s vote in Barack Obama’s favor even as white women backed Mitt Romney, that their power as voters began to enter mainstream discussions of politics.

In recent interviews, political strategists and policy experts said that one of the biggest things 2020 candidates need to be aware of is that women of color are not a monolithic group. To speak to them effectively means communicating an understanding of the needs of a number of communities, as well as various racial and ethnic backgrounds, economic situations, and sexualities.

Candidates will need to be able to specifically and convincingly discuss the ways issues like criminal justice reform, immigration, pay inequality, voting rights, and police violence affect black, Asian, Latina, and Native women, and other groups, while also remaining open to learning about new issues directly from affected communities.

However, there are some common threads between these groups that should inform how candidates talk to women of color.

Broadly, polls show that they’re seriously concerned about the ways racism and the public resurgence of white supremacy are affecting their lives and their communities. At the same time, women of color, like other groups, also deeply care about things like access to quality health care, education, the environment, and the economy, but the important thing here is that women of color say they experience these issues differently due to the oftentimes unique ways these issues affect their communities.

“Women of color want to know that at the end of the day, when you’re behind that desk, you’re going to make decisions that will benefit them and their families, just like any voter would,” says Danyelle Solomon, the vice president of race and ethnicity policy at the Center for American Progress, a liberal policy nonprofit based in Washington, DC. She adds that this cycle, black and brown women want political candidates “to explain what their actual policies are, and how those policies will be a benefit for their communities and their needs.”

Unfortunately, candidates and political parties have often failed to do this, leaving some women of color to feel like their votes are being taken for granted.

According to a recent survey of 2,663 women who identify as black, Latina, or Asian/Asian Pacific Islander conducted by Intersections of Our Lives, a coalition of reproductive justice groups, this group overwhelmingly supported Democrats in the recent midterm elections. But 78 percent of women surveyed said that candidates often failed to focus on issues important to them, which suggests that their political support isn’t being rewarded with actual changes in policy.

On a different question, 76 percent of women added that politicians must understand that the needs of women of color are different from those of white women. “You can’t lump us in with any other group; we’re unique,” Allison says. “We want to connect with you and trust that you as a candidate have the heart and the willingness to fight for our communities.”

In a contest where women of color are expected to play a key role, candidates will need to do more to reach them

It’s still very early in the primary season, and candidates still have time to develop better policies (or, in some cases, any policies at all) that are tailored to the specific needs of this group. But one thing that’s clear right now is that a simple reliance on prior records and history won’t be sufficient.

Allison explains that women of color, like black voters and other voters of color more broadly, are unlikely to be motivated by a purely anti-Trump message. They want clear and specific policies about how the candidates plan to fight white nationalism and racism, close racial wealth gaps, and deal with racial injustice in ways that help their communities.

Candidates need to see “women of color as persuadable, and center them in outreach and campaigning,” she says.

Some candidates are already seeing success with this framework. Warren, for example, was met with a standing ovation at the She the People forum after she discussed specific policies aimed at issues uniquely affecting black and brown women, including a proposal to hold hospitals accountable if they fail to reduce the number of black women dying during childbirth.

Warren has since further explained how she plans to reduce black maternal mortality, an issue that has seen increased attention from Congress and several of the 2020 candidates, including Harris and Sen. Cory Booker.

Conversely, the need for candidates to bring specific policies to the table when speaking with women of color also highlights areas where some candidates might struggle.

Sen. Bernie Sanders, for example, has struggled to shake the perception that he cannot effectively speak to racial issues beyond his overarching message of fighting economic inequality, and he was recently criticized during the She the People forum for highlighting his participation in the March on Washington and support of Jesse Jackson instead of answering a question about how he would address the growth of white nationalism in the US. The exchange led to a wave of commentary that Sanders will have difficulty winning over women of color, a claim that in turn led to defensive responses from members of Sanders’s campaign.

The truth likely lies somewhere in the middle — recent polling of black women puts Sanders in second place behind Joe Biden (his support among other women of color varies), and the Vermont senator has already gotten endorsements in South Carolina, a state where black women are expected to make up a large percentage of primary voters. But even with this early support, as the primary continues, it is clear that women of color will want all the candidates to do more to show that they seriously understand the range of issues that affect them.

“The question is for [Sanders] and every other candidate to be able to give this more than lip service, to be able to understand what it means for people like me to feel afraid, and not only for ourselves but our communities and families,” Sayu Bhojwani, the founder and president of New American Leaders, a group focused on increasing the number of first- and second-generation Americans running for elected office, recently told Rewire News. “That requires a kind of empathy and compassion, but it also requires very specific policy responses.”

It’s a challenge that all the candidates will need to meet as the election cycle continues. Candidates “need to be talking to women of color on an ongoing basis, not just jumping in and out of communities,” says Solomon from the Center for American Progress. “You need to really connect with these women and hear what is going on in their lives and communities to better shape policies.”