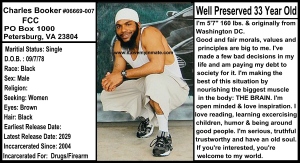 I have this memory of us dancing. Well, not dancing so much as swaying ever so gently. There’s no music except for him singing the Isley Brothers into my ear: Drifting on a memory / ain’t no place I’d rather be / than with you. We’re alone, together, at the Atlantic seawall of his Guyanese homeland. We’re on Cooper’s Beach in the Southampton of my summers. We’re anywhere we want to be—anywhere but here, where we actually are, behind the stone and concrete, the concertina wire and gun towers, the electronically controlled and locked doors of Sullivan Correctional Facility, 100 miles from our New York City. An incalculable distance from the geography of our dreams.

I work hard not to think about those years with my husband spent behind the wall. As much as the memories are filled with beauty, the harsh and ugly of it is a reliable stalker, which is why I cried my way through 10 hours of “Making a Murderer” this past weekend, cried for all that loss and pain, cried for the women who shadowed the life of the man, the prisoner, Steven Avery. There’s Lori, the wife and mother of five small children who near loses her mind when her husband is snatched up, kidnapped really; Jodi, the fiancée who couldn’t battle her own demons and the system’s demons at the same time; and Sandy, who meets Steven as I met my husband—after he’s already incarcerated. Like me, Sandy went all in, headlong and hopeful. I know that hope, honor her fight.

In the beginning, before I got really emboldened and sick to death of all the secrets and shame, the bifurcated life, the lies, I had dared to tell only the people who were closest to me: I think I love Rashid, I had said, all hushed and confession-like. They tried to understand but I knew they didn’t. Even still, I appreciated…what? Their politeness?

I wasn’t supposed to love him. He wasn’t a clean fit in the narrative arc of my life.

They’d met him too, as college students who had taken a class on African-Americans and the criminal justice system. Rashid was one of the prisoners with whom we held a series of discussions about America, incarceration, race, and class. He wasn’t much older than we were, and like us, he was getting his degree, because back then prisoners could get aid to further or start their education, a last vestige of the Black Power movement.

Mostly that was gone by the time we met Rashid, but we were a generation who still held onto those ideals despite or perhaps because of a decade of Reagan-Bush hate-speech. He ain’t incarcerated. He’s my brother. And then of course, it didn’t hurt that Rashid was charming and fine as shit. He liked the music we liked, shared our sense of social justice, read the same books. He felt like one of our crew, except we went home and it was possible he never would.

But the fact is I wasn’t supposed to love him. He wasn’t a clean fit in the narrative arc of my life. Even my dearest friends were worried. Are you sure, asha? they would ask me. I mean, seems like it would bring you an awful lot of pain. It was the early ‘90s. There was Fight the Power and No Justice, No Peace, but no talk of ending mass incarceration, depopulating prisons or the New Jim Crow. There was talk of crime and drugs but not of economic disenfranchisement or compassion. There was Angela Davis and there were activists around the country pushing back. But those conversations were largely silenced by the louder and more hyped discourses that began with with lock ‘em up, that centered on throw away the key, and in some parts of the nation, ended with, Why shouldn’t we be able to execute 11-year-olds?

The thing that was as true then as it is today is that there was bipartisanship on matters of criminal justice. Only then it was all about locking them up, whereas now even the harshest of lawmakers are taking a mea culpa. I try to imagine “Making a Murderer” getting the kind of play it’s getting now if it were made when Rashid was doing his bid. Because believe me, there is and have been a bunch of Steven Averys out there among the 2.2 million people who’ve gone missing into the criminal justice system our watch. Some have been executed. Most have just been buried alive, because that’s what prisons do.

What came back to me as I watched the show this weekend is that in 1995, the year I married Rashid, no one knew what to make of me, an upper-middle-class girl who had done time in prep schools and Ivies. After all, this was a man who was in prison for his role in a murder committed when he was 17 years old.

How much time he got? my friends wanted to know.

In letters that came twice per week, we wrote ourselves as multi-volumed stories. We held nothing back, left it all on the page.

There are all these fixed ideas about who prisoners are, fixed ideas about the people who love the imprisoned. Even in “Making a Murderer,” we have a sense of Jodi’s alcohol misuse more than anything else about her. We don’t know where she came from, what she loved or dreamed of when the night came and she could lose herself in her own hopes. I don’t know, either. But given that our nation is home to 5% of the world’s population yet 25% of its prison population, the minute someone tells you prisoners or their girlfriends or wives are any one thing, it’s a license to stop listening.

But if the world couldn’t see it, Rashid and I saw each other in the space of our love. The world so locked out and away from our ability to engage it, we simply engaged one another. Fully. In letters that came twice per week—often more, rarely less—we wrote ourselves as multi-volumed stories. We held nothing back, left it all on the page. All that vulnerability that surrounds new love, all the things you always wanted to but get afraid to say—the letters allowed us a fearlessness and an intimacy, written as they were, not on a computer but in our own hand. No LOLs, no emojis, no abbreviations. We were the full of our hearts, the plenty of our desires.

We fell in love in those letters—and in nightly monitored calls and weekly visits that began sometimes waiting for a bus with a crowd of women at midnight at Columbus Circle, other times for a small van service that did door-to-door pickups at 4:15 a.m., and later, after we married, on trailers where we were allowed 36-hour conjugal visits twice or three times a year if we were lucky.

I think about the relationships I’ve had since my marriage ended. Sort of intimacy-lite.

But undistracted by work or basketball games, family obligations or chores, we focused solely, exclusively, on what it was that made our souls, what it took to nurture them. We listened to each other. We asked, How are you? and meant it. It seemed so clear to me, if to no one else: Of course I would marry him. Who wouldn’t? And when I became pregnant on one conjugal visit, of course I would have his child. Who wouldn’t want to multiply the love that we shared? Near a decade in when I got pregnant, our love was only stronger. I never imagined it could end.

Today, on the other side of my marriage, I try to imagine having the love Rashid and I shared out here in this world of multiple screens, our multitasking lives. Could we ever love like that again? Could I? Could I commit my life to working tirelessly with lawyers and advocates and family members to change the life-course of the man I loved? Could I even bear to receive it, the focus of one person so squarely on me? My God. He was concerned with all that I thought, all that I loved or desired, all that I imagined, all that I feared. He listened and debated and posed solutions. He researched when he didn’t know answers. He returned to conversations months long past. He stayed checked in with me. I love you all the way, girl. Why wouldn’t everything you do and say and experience be of interest to me? He actually said that to me. What the hell?

I know what Sandy gets in her relationship with Steven. As much as it must seem she’s giving to him, holding him up, working on his case, he’s giving to her a presence that, bizarrely, the world outside the prison may never allow.

I think about the relationships I’ve had since my marriage ended. Sort of intimacy-lite. Love on a diet. It’s occurred to me: Could I even stand to be wanted in that way, now that I’ve been all the way into the world in a manner I hadn’t been at 23, when I fell in love with Rashid? I’m a woman in my forties now, a mother, a person bruised, broken in places, healed in others, but the scars remain. All those parts held together with screws and staples. They work and whatnot. Just differently. It’s all really different now. I’m really different. And would I even want someone to see me as I needed to be seen all those years ago? All that history laid bare and ready for dissection? The thought terrifies me. Makes my stomach knot up. Sends me down rabbit holes that keep me safely at virtual arms-length: Facebook. Twitter. What’s good my peoples?!

I don’t have advice or a final word on the women who love or loved Steven Avery. There’s just some stuff I know after four decades of living rather than two. I know it’s less about happy or sad endings and more about the fact that shit just ends. As I’m sure Steven and Sandy will do, Rashid and I fought long and we fought hard for freedom and for love. We fought in multiple courts, the states, the feds, administrative courts, immigration court, and in the end it was just over. He was put on a plane and sent back to Guyana where he didn’t know anyone anymore. He was scared, I think, but grateful to walk free. I was scared, I know, but grateful he was free and I was here raising our magical, wild-as-the-wind Aries daughter born in the Year of the Dragon. She looks and laughs like him but she isn’t him. And she isn’t me. She’s her own incredible self. And the most magnificent gift I or Rashid could ever receive. So after everything, a check in the win column, a check in the loss.

Which is ultimately what I hope for Sandy, for Steven. That there are some checks in the loss column. But some in the win column, too.