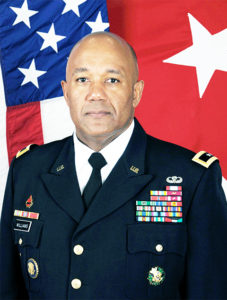 U.S. Army Lieutenant General Darryl A. Williams has been named the 60th superintendent of the United States Military Academy at West Point, making him the first African American to command the school, which was founded in 1802.

General Williams assumed command  during a ceremony in Jefferson Hall. A 1983 graduate of West Point, he holds masters’ degrees in Leadership Development, Military Art and Science and National Security Strategic Studies. He succeeded Lieutenant General Robert L. Caslen, Jr., who retired from the Army after 43 years.

In 2015, West Point, which is based in West Point, N.Y., erected cadet barracks, honoring Four-Star General Benjamin O. Davis, who was the fourth African American and the first in the 20th century to graduate from the Academy.

Davis, who was appointed to West Point by Republican Chicago Congressman Oscar De Priest, survived a very painful four years at the Academy. He entered West Point in 1932. His white classmates. Including William Westmorland, who would later become commander of U.S. Forces in Vietnam, refused sit, speak, eat or walk with him.

Henry Ossian Flipper was the first African American to graduate from West Point. He graduated in 1856. Like Davis, no white cadets spoke to him during his four years at the Academy. Flipper was promoted to second lieutenant of the all-African-American 10th Cavalry, stationed at Fort Sill in Indian Territory.

General Williams served as Deputy Chief of Staff of the United States Army in Europe, which is located in Wiesbaden, Germany. He also was Deputy Commanding General for Support for the 2nd Infantry Division in the Republic of Korea. In addition,  he was Commanding General for the United States Army Warrior Transition Command and Assistant Surgeon General  for Warrior Care and Transition.

Williams is a native of Alexandria, Virginia.