Grooming regulations in the different branches of the military have been at odds with natural hair for many years. Yet a recent report from The New York Times shows that a number of Black women in the Army now have reason to celebrate: The military branch has lifted its ban on hair that is worn in locs. 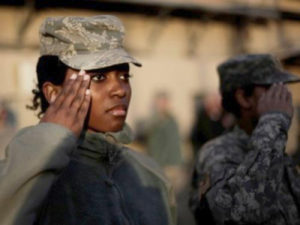 According to the Times:
Sgt. Maj. Anthony J. Moore of the Army’s office of the deputy chief of staff for personnel said the new rules offered female soldiers another hairstyle option.
“We understood there was no need to differentiate between locks, cornrows or twists as long as they all met the same dimension,” he said, according to The Northwest Guardian, a publication of Joint Base Lewis-McChord in Washington State. “Females have been asking for a while, especially females of African-American descent, to be able to wear dreadlocks and locks because it’s easier to maintain that hairstyle.”
The Army directive says that each lock, or dreadlock, “will be of uniform dimension; have a diameter no greater than a half-inch; and present a neat, professional and well-groomed appearance.”
Enlisted women—whether they wear their hair natural or not—have been pushing for this since the Army changed its rules on natural hair in 2014. Three years ago, the military branch banned large cornrows, locs, and twists, as well as hair that could not be “neatly” (by their definition) pulled back into a bun. A number of Black women said these prohibited looks targeted Black-textured hair—and through a combination of petitions and pushback (and videos like this one), they were successful in getting some of the rules relaxed. Locs were the final fight and as of this recent ruling, they now have a place in the Army.
“I didn’t think it would happen before I retired,” Capt. Danielle N. Roach, who has been enlisted for 14 years, told the Times. “When I heard it, I was like, ‘There’s no way this is real.’ It’s a shock to a lot of people.”
For the Black women who are protecting the nation, they won to fight to be their natural selves.