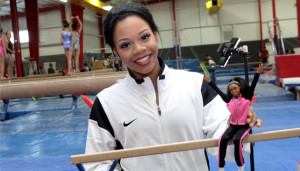 Gabby Douglas has two gold Olympic medals to her name, multiple world championships, and now her very own look-a-like Barbie doll. She is currently training for the upcoming Olympics in Brazil, and toy maker, Mattel, decided to celebrate her success at the U.S. gymnastics team’s trials with a Barbie of her likeness.

She told People magazine, “I’m so excited. My older sister and I used to play with Barbies and create these dramatic fantasy stories, so it’s such a huge honor.” She also told reporters that she hopes that young girls will take away her number-one lesson, which is to “Stay true to yourself, and go after your dreams.”

“Be yourself and really embrace your inner beauty and your true talent,” she said. “Believe in yourself. Never let anyone tell you you can’t do something when you can.”

“Being honored as a Barbie Shero further motivates me to inspire girls by being the best I can be.”
When asked about her upcoming performance in Rio de Janeiro, she replied, “I’m just going to do the same thing I did in London. Focus, train really hard, [and] be consistent.”