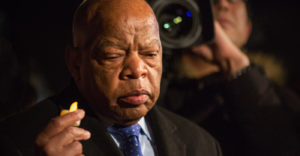 On July 16, the U.S. House voted 240-187 to condemn the racist language of Donald Trump in a series of twitter communications over the weekend. All 235 Democrats voted yes. On July 13, President Trump began a targeted series of racist vitriol on social media aimed at four female Congresswomen of color in the U.S. House.

A roll call vote on the House floor rebuking a President is very rare.

The President responded on twitter midday, writing, “Those Tweets were NOT Racist. I don’t have a Racist bone in my body! The so-called vote to be taken is a Democrat con game. Republicans should not show ‘weakness’ and fall into their trap.”

“I know racism when I see it. I know racism when I feel it, and at the highest level of government, there is no room for racism. It sows the seeds of violence and destroys the hopes and dreams of people. The world is watching; they are shocked and dismayed because it seems we have lost our way, as a nation, as a proud, great people. We are one Congress, and we are here to serve one house – the American house, the American people,” said civil rights legend and Georgia Congressman John Lewis on the House floor during debate.

Debate grew heated as Republicans attempted to bring up a measure to condemn Speaker Nancy Pelosi (D-CA) which failed. Democrats moved forward as they defended not only their colleagues but immigrant communities President Trump often vilifies.

“Some of us have been victims of the stain, the pain, the hurt of racism. In the 50s and during the 60s, segregationists told us to go back when we protested for our rights. They told ministers, priests, rabbis, and nuns to go back. The told innocent, little children seeking just equal education to go back,” Rep. Lewis added.

“Like the vast majority of Americans, I’ve grown increasingly frustrated with the childish rancor of our public discourse. Our inability to conduct ourselves in a civil and respectable fashion has paralyzed the most powerful government in the history of the world, and for what? A 10-second soundbite on primetime news and a few thousand twitter followers?” said Rep. Emanuel Cleaver (D-MO), who presided over part of the debate over the resolution condemning Trump’s words.

Shortly after debate ended and the measure condemning the President passed, Rep. Al Green (D-TX) started a debate clock that will expire on Thursday that will cue up another floor vote on the question of impeachment. Even though Rep. Green’s similar measures have failed in the past, he has gained votes each time he has tried.