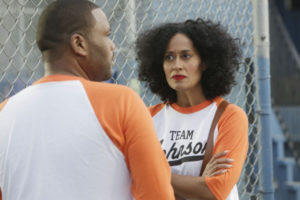 Tracee Ellis Ross is setting the record straight about speculation over her black-ish salary.

“There has been a lot of conversation and speculation the last few days regarding my black-ish salary. I was in renegotiation, like many actors find themselves in during the fourth season of a successful show,” Ellis Ross wrote on Twitter, addressing a report from The Hollywood Reporter that claimed she was paid considerably less money than her costar Anthony Anderson — who also serves as an executive producer for the show. The report also alleged she was considering appearing in fewer episodes if she could not renegotiate her salary.

Although Ellis Ross did not explicitly confirm the pay gap between her and Anderson’s salaries, she did go on to say, “I wanted to be compensated in a way that matches my contribution to a show that I love for many reasons, including the opportunity it allows me to reshape what it is to be a fully realized black woman on TV.”

“The words and thoughts that were in the original article that started this public conversation were not mine; there were never any threats. I wish I would have been called by the reporter to confirm that,” she added.

The 45-year-old actress concluded her message by saying that even though “having had my renegotiation become a public conversation was awkward,” she was “grateful for the outpouring of support.”

“I’m truly thankful that important conversations are taking place about fighting for women’s worth and equality, and tightening the pay gap in every industry,” she wrote.

Ross has been a very vocal supporter of the Time’s Up movement.

On the Golden Globes red carpet, Ross explained her decision to wear all black by saying, “I wear black today as a ‘we’ not as an ‘I,’ as a celebration of our collective power as women, as an embodiment of sisterhood, solidarity and the work being done to create structural change.”