It seems like a common sense conclusion to assume that the student bodies at Historically Black Colleges and Universities (HBCUs) mainly consist of African American students. However there are some HBCU’s where African Americans comprise a minority of the student population. NPR recently reported on one such school, Bluefield State College.

Shockingly, Bluefield State College’s student body is 90 percent white. Located in Bluefield, W. Vir., the school is part of West Virginia’s public education system and was founded in 1895 as Bluefield Colored Institute. At that time, the school served as a Black high school. Many of the student’s parents migrated to West Virginia to work in the coal industry.

In the 1920’s the school became known as Bluefield Institute. The school became a launching pad in the creation of the region’s Black middle class. Bluefield became fully accredited in 1954.  After the Supreme Court’s Brown v. Board of Education decision, Bluefield’s student population began to change because Black students were able to choose from a wider range of options for their education.

The mining industry in the area also began to evolve with the introduction of new technology which caused many families to look for work elsewhere. This, coupled with the return of white veterans from the Korean War, who were able to use the GI Bill to attend school instigated a transformation of the racial makeup of the school’s students.

The ‘60s brought many changes. The student population at Bluefield was now nearly half white, and in 1966, the state chose the school’s first white president, Wendell G. Hardaway.  Hardaway soon hired 23 new faculty members who were all white, and the school’s dedicated faculty dropped to just 30 percent Black by 1967.

The next two years brought lots of turmoil with students staging a protest against Hardaway’s discriminatory treatment of Black faculty and students. Tensions also rose with the assassinations of Martin Luther King Jr. and Robert Kennedy leading to death threats against administrators and a list of demands being delivered to president Hardaway.

Students continued to protest against what they felt a-mounted to “mental genocide” and “the educational extermination of the Black student.” Things soon became even tenser when dorms on the campus were closed in response to a bombing at the school’s gymnasium. The dorms remained closed, and this was the final step in the two decade journey of Bluefield going from an all-Black college to a nearly all white commuter school.

To this day, there are several lawsuits filed by former administrators, accusing the school of racial discrimination. This leads many to wonder if the school should still be classified as an HBCU.

The intersection of Bluefield’s past and present is an interesting one. The school’s alumni association is all Black and has never had a white member. Homecoming events no longer reflect the makeup of the student body as most who attend are Black even though the school has been majority white for decades. 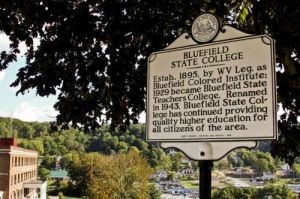