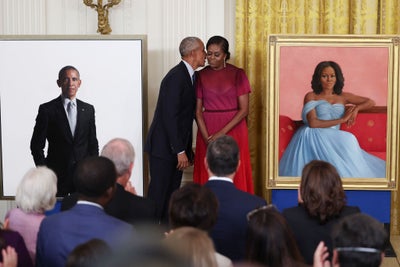 The Obamas made an official trip back to their former home to be on site for the unveiling of their official White House portraits.

Unlike the widely publicized National Portrait Gallery portraits of the first Black president and first lady, painted by Kehinde Wiley and Amy Sherald, respectively, the paintings unveiled Wednesday are the official portraits displayed in the White House. The newest pieces from artists Robert McCurdy, who painted President Obama, and Sharon Sprung, who painted Mrs. Obama, join depictions of past presidents and first ladies in the White House dating back to George and Martha Washington.

The ceremony in the White House East Room felt more like a homecoming, with the crowd welcoming Barack and Michelle with a standing ovation upon their arrival. They peppered the couple’s remarks with rousing applause and laughter at every zinger (President Obama had plenty). Michelle’s mother and brother joined the audience at the ceremony, along with past Obama administration officials, including former Attorney General Eric Holder, former HUD Secretary Julián Castro, and the former Senior Advisor to the President Valerie Jarrett.