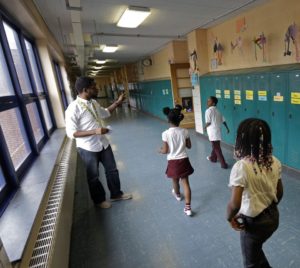 As classrooms across the United States become more diverse, schools are working to hire more teachers of color, particularly black teachers. Some have actually done a reasonable job of bringing more African American educators in the door. Yet the vast majority of teachers remain white women, in part because many black teachers leave just a few years into the job. Federal data suggests that in 2012-13, nearly 22 percent of black public-school teachers moved schools or left the profession altogether, compared to only about 15 percent of white, non-Hispanic teachers.

The result is that only around 7 percent of the country’s teachers are black, despite the fact that African Americans make up around 16 percent of the overall student population. I’ve written about why that matters, but the upshot is that children benefit when they see and hear people who come from different backgrounds. Students learn to collaborate and compromise, and they prepare for the inevitably global nature of their future jobs. When schools have a diverse teaching force, they may also be able to limit the effects of implicit bias. Arecent study found that white teachers have lower expectations than black teachers for the same black students. Having more teachers of color might help mitigate that imbalance.

So in an attempt to figure out how schools can retain more black teachers, Education Trust, an advocacy organization focused on low-income students and those of color, did something that shouldn’t be novel, but is: They actually talked to African American educators about the challenges they face. “We just decided to go out and listen,” Ashley Griffin, the lead author of a new report and the current head of K-12 research at the nonprofit, said during a phone interview.

Using government data from the 2012 Schools and Staffing Survey, Education Trust identified states and districts with significant numbers of teachers of color, and then asked for willing interviewees. In all, the researchers spoke with 150 black teachers with varying experience levels at both traditional public schools and charter schools across seven states. (The organization also conducted similar interviews with Latino teachers, which it will lay out in a future report.)

Most other qualitative surveys have involved interviews with teachers in just a single state or district. This report is particularly interesting because it features teachers from across the country, suggesting, as the researchers do, that the findings “can be extended to an entire population of black teachers and are useful to multiple stakeholder groups.” It’s worth acknowledging that these are the voices of teachers who were willing to share their perspectives, but there’s no evidence that these teachers felt more or less compelled to outline the challenges they face. And the findings are valuable because they may highlight blind spots for schools, especially those that aren’t sure why relatively new hires are quitting.

Education Trust discovered in focus groups in both rural and urban schools that many black teachers experience constant tension at work between a sense of frustration at being “pigeonholed” into teaching primarily black students and a desire to support black students specifically. Increasing the pipeline of black college students pursuing teaching isn’t enough, nor is rethinking how colleges of education operate. The school environments teachers end up in after they graduate with a credential matter, too. 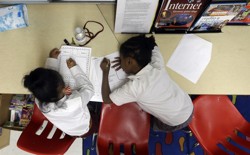 Current working conditions for teachers in schools are “extremely racialized,” Griffin said, and schools “need to understand the nuances of these experiences to retain teachers.”

Consider discipline. Many of the teachers said they felt more able than colleagues to manage their classrooms. As one teacher (the report does not include names so that teachers would feel comfortable sharing their experiences) said:

I didn’t have to get loud or do anything. It was just, I had a no- nonsense kind of attitude, where it’s a lot of nonverbal cues. ‘I expect more from you.’ You know, it was just, it’s a different vibe than other teachers, where they kind of make excuses, and ‘Oh, I can’t handle you. I’m afraid of you. I want you to be my friend.’ No. They’re going to respect me.

Yet black teachers said that very ability to manage a classroom meant they were then viewed primarily as disciplinarians and not as educators—as the report notes, “a reductive stereotype that we heard throughout the focus groups. These teachers were assumed to be tough and strict instead of being able to connect to their students and use that connection to establish order and create a classroom environment conducive to learning.”

In other words, the strengths that many black teachers possess and would like to use to benefit children of all backgrounds are the very traits used to limit their professional growth. (The report doesn’t say so directly, but that pigeonholing seems to have as much to do with white teachers feeling unprepared or unwilling to handle certain scenarios as it does with believing black teachers are capable of only certain tasks.)