Making films based on true events gets a lot of projects off the ground. Sometimes you watch a movie and when you discover at the end it’s based on fact, it adds something. Sometimes it doesn’t. The Banker proves that if you go to that well too many times, the yield is less and less.

As the story goes, even as a kid in small town Willis, Texas, Bernard Garrett was analytical, ambitious and a budding capitalist. As an adult, Garrett (Anthony Mackie, The Hurt Locker, Avengers: Endgame) moves to Los Angeles in the late ‘50s with his wife Eunice (Nia Long, The Best Man Holiday) and young son. That’s when this mathematician/entrepreneur decides on real estate as a career. With help from a businessman, Patrick Barker (Colm Meaney, Star Trek: Deep Space Nine), Garrett buys rental properties in white neighborhoods, moves in black tenants and integrates communities.

Because of the times and discrimination, Garrett remains the brains behind the scenes and Barker, who is white, is the front man. The emerging real estate tycoon is joined in his endeavors by Joe Morris (Samuel L. Jackson), a crass well-to-do night club owner who also owns buildings. Morris is equally aware that getting ahead in business, as a black man, requires subterfuge.

So, by any means necessary, Garrett and Morris grow their partnership and buy office buildings and then banks. As they do, they enlists a young white construction worker, Matt Steiner (Nicholas Hoult), as their mask. They groom him in the fine art of golf, financial analysis and networking. Initially, Steiner is an awkward but energetic apprentice. Eventually, he has a mind of his own, which poses big problems.

With a fairly sterile story by Brad Kane and a pretty superficial script by writers Niceole R. Levy, Stan Younger and David Lewis Smith, most of the stilted dialogue is bland and cliché. The only times the conversations have bite is when Jackson uses profanity and the N-word. The characters evolve but few ever exhibit any real or deep emotions. A little jubilation when things go right. Some dread when things go wrong. Even when Garrett is humiliated by racists, he displays controlled anger.

Most scenes look like they were shot on a set, and not in real places. This adds to a glossy style that impedes any kind of authenticity. The cars from the era look they were procured from an antique car show. The clothes—suits to golf outfits to everyday apparel—look fresh off the rack (costume designer Aieisha Li). The unlived-in interiors (production designer John Collins; set decoration Lynne Mitchell) are too fastidious. The lighting and cinematography (Charlotte Bruus Christensen, A Quiet Place) are more fitting for a commercial. Ditto the musical score (H. Scott Salinas). 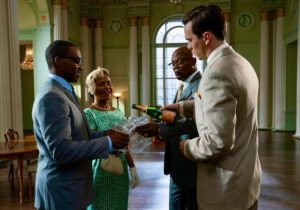 Making a drama pop off the screen is not an easy task. There are no action scenes to get the adrenalin pumping. No thrills that will make you jump out your seat. No insane humor to make you laugh. All a director has to work with and hope for is a script and a cast who can make mountains out of emotional molehills. That kind of magic, flair, intensity or style is lacking in director George Nolfi’s overall approach. Not one scene hits a true emotional peak. Not one argument rises to the level of a fistfight. Though a lot hangs in the balance, and anxiety is evident, abject fear never arises.

Anthony Mackie’s performance is way too safe. It’s as if he’s playing the character by the book and not by instincts. The audience needs more from the Garrett character. He has to be compelling, not refined. He isn’t a football hero winning a game, a small-town politician winning a big race, or a man on death row fighting for his life. He’s a capitalist out to make money with one lofty goal—forcing integration on a society that is not too willing to oblige. Somehow, within the confines of that do-good character, Mackie needed to find grit and anger and unleash it on the screen. He doesn’t.

Sam Jackson is as animated as ever. Considering his character is less well drawn, he steals scenes from Mackie: “Owning a bar is like owning the other side of real estate.” He also uses language and a modern cadence that was probably not used back in the ‘60s. Nia Long is far more talented than her role. Nicholas Hoult has been in better films (The Favourite) and his Matt Steiner characterization won’t win him any new friends. The rest of the supporting cast is diligent, but not noteworthy.

Part of this reenactment includes Morris dressing up like a chauffeur, Garrett masquerading as a janitor and Eunice impersonating a cleaning woman so the three smart people could observe their not so smart young white counterpart run their business. They couldn’t let prospective clients know that Steiner’s puppeteers were black. But watching them don these servant clothes just to get over is pretty deflating. True or not true, it makes this movie less appealing.

Garret was a pioneer. His federal court testimony pushed legislators into enacting the Fair Housing Act of 1968, which made it illegal to refuse to sell or rent property on the basis of race, religion or gender. That’s an incredible achievement. But it wouldn’t be surprising if audiences walked out of the theater wishing they had seen Garrett’s story as a documentary and not as a stiff feature film.

In the age of Harriet, Hidden Figures and even BlacKkKlansman, this lackluster biofilm could be a tough sell.