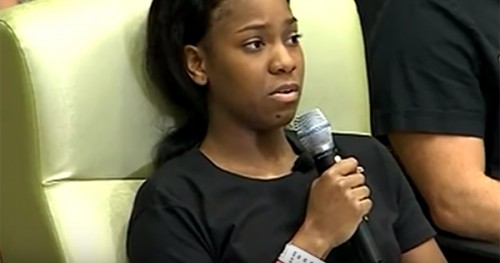 Nationwide — Patience Carter, one of the victims who survived the massacre at Pulse Nightclub in Orlando, Florida, says that while trapped in the bathroom with the shooter, Omar Mateen, he asked if there were any Black people in the club.

After one Black person replied yes, Mateen then said, “I don’t have a problem with black people. This is about my country. You guys suffered enough.” Carter says, he then went on to shoot and kill three more people before police stormed into the bathroom.

Carter, says she is from Philadelphia and was taking a vacation in Orlando. She says that she and many others fled to the bathroom when they heard the inital gunshots.

During a recent press conference, in which victims talked about their horrific experience, Carter recited a poem that she said she wrote from her hospital bed to cope the night before. Though very grateful to be alive, Carter said it’s also very difficult.

She told reporters, “The guilt of feeling grateful to be alive is heavy. Wanting to smile about surviving, but not sure if the people around you are ready as the world mourns the victims killed and viciously slain. I feel guilty about screaming about my legs in pain because I could feel nothing like the other 49 who weren’t so lucky to feel this pain of mine.”

Sadly, that dreadful night, 49 people were killed and more than 50 were seriously injured.