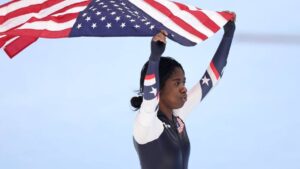 On Sunday (Feb. 13), the 29-year-old Florida native made history  in the women’s 500-meter speed skating event at the Beijing Games.

Jackson is the world’s top-ranked 500 meter skater. She has been an inline skater since age 10, however, there is no Olympic competition for roller derby. In 2017, she pivoted to speedskating and placed 24th in the 500m at the 2018 PyeongChang games.

She was all smiles as she finished her lap. But she was overcome with emotion after finding out she won gold, celebrating by lifting the American flag overhead during a victory lap.

But luckily for Jackson, teammate Brittany Bowe, who placed first in the Trials, gave up her spot to Jackson out of “the spirit of the Olympics.” Bowe said her best chances of winning a medal are in the 1000m and 1500m. She said Jackson “earned the right” to be in the Olympics.

“Sure, I had a really great session,” Jackson said. “But when it came to crunch time, I made a mistake. I am very fortunate that she is a very selfless person and she would do something like this for me.”