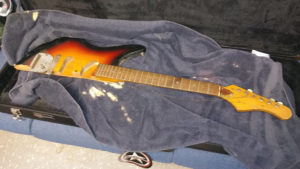 By George Tillman, Special to The New Tri-State Defender

Many years ago, I started a project to bring HIV and AIDS awareness to the Memphis community. In 1998, I coordinated a World AIDS Day awareness benefit and that’s where my journey to owning a piece of Jimi Hendrix’s guitar began.

John Tigrett, the owner of Memphis’ Hard Rock Cafe, opened his doors so a community of Stax musicians and singers could put together a fundraiser for World AIDS Day that year.

This is where I met Larry Lee, a guitarist who played with Jimi Hendrix, Al Green and many other great stars. And as fate would have it, we would meet again. This next meeting was happenstance as Larry happened to be living in the same rooming house as my girlfriend at the time.

He called me over and said, “I want to give you something.” I said OK, and when he came out of the back room, he had something wrapped in this black towel, just as you see in this photo. I unwrapped the towel and saw a broken guitar. I asked, “What is this? Is this some kind of joke?”

“No,” he replied. “You know whose guitar this is?” I told him no and then he said it was Jimi Hendrix’s guitar.

I asked him if he played with Jimi Hendrix and when he said yes, I was shocked. Of course, I wanted to know more about how he ended up with the guitar all these years later. He said they were on stage playing and Jimi was breaking up the guitars and breaking up the equipment and doing what he always does at the end of playing.

Larry said the guitar broke and part of it hit him on the leg. After the show, he picked it up and kept it.

I was amazed to hear this history and touched at the same time. To this day, I’ve never really talked about it for fear something would happen to it before I could share this story and precious artifact.

Now it will be placed temporarily in the National Museum of African American Music (NMAAM) in Nashville, where visitors can view this smashed guitar – with its neck and fretboard still intact – for themselves.

“Jimi Hendrix is one of the most important figures in American pop culture, not just American music,” said Dr. Steven Lewis, curator at NMAAM. “This guitar provides a physical reminder of the power of his music, his personality and his brand of self-expression that was as influential in the 1960s as it is today.”

NMAAM, set to open this year, is envisioned as the only museum dedicated to educating, preserving and celebrating the influence African-Americans have had on music. I am happy to contribute to this endeavor.

Along with the guitar, NMAAM will feature the guitar in its Crossroads Gallery along with other items of Jimi’s, vintage concert materials.

George Tillman, a screenwriter and filmmaker, has been in the entertainment industry for 40 years.