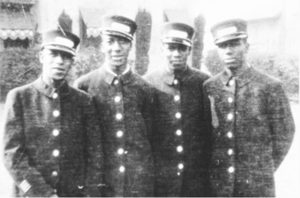 Are you a descendant of a Pullman Porter? Or dining car waiter? On August 25, 2017 the National A. Phillip Randolph Pullman Porter Museum celebrated the 92nd anniversary of the founding of the nation’s first Black union. Today, the Museum, who for 22 years has been preserving and presenting the legacy of Mr. Randolph and the Pullman Porters; announced it is taking those efforts one step further. The nation’s only Black labor history museum, that exclusively interpret the amazing story, announced the launch of a three-year campaign finally complete a national registry.
The goal of the national research campaign is to find and document 20,000 living descendants of African-Americans who worked on the railroad between 1869 thru 1979 during the golden era of railroad travel. The Museum began collecting descendant information in 2000 and wants to complete the historic registry by August 2020, according to the Museum’s founder Dr. Lyn Hughes.

Pullman Porters were Black men whose superb service to railcar travelers in the 20th century earned them notoriety, as “international ambassadors of hospitality”, and whose wages, tips and cross-country experiences fueled a bourgeoning Black middle class. At one time, as many as 10,000 men belonged to the Brotherhood of Sleeping Car Porters, which was founded by Asa Philip Randolph. Randolph was a magazine publisher who had written about Porters’ poor working conditions when he was enlisted by a group of Porters to organize a union and fight for fair wages and equal treatment.

The NAPRPPM is the only museum in the nation that exclusively honors the history of the Pullman Porters. Located at 10406 S. Maryland Ave, in a U.S. Department of Interior’s Pullman National historic landmark district, that is also nestled in the Pullman National Monument, Chicago’s first National Park, created by President Barack Obama in 2015.
For information on how to contribute to the registry, call (612-4PORTERS) or visit www.pullmanportermuseum.com, to add you and your descendant to the registry and to become a member of the museum.