AccuWeather reports as Major Hurricane Irma churns across the northern Caribbean and towards the United States, residents along the Gulf and East coasts of the U.S. need to be on alert.

Irma will blast the northern Caribbean with flooding rain, damaging winds and rough surf this week, bringing life-threatening conditions to the islands.

A similar scenario could play out somewhere along the Gulf or East coasts this weekend or next week, depending on where Irma tracks. Residents are urged to prepare now.

“This hurricane has the potential to be a major event for the East Coast. It also has the potential to significantly strain FEMA and other governmental resources occurring so quickly on the heels of Harvey,” Evan Myers, expert senior meteorologist and chief operating officer, said.

A landfall in Florida, Georgia and the Carolinas is all in the realm of possibilities. Irma could also head into the Gulf of Mexico.

Another scenario still on the table is that Irma curve northward and miss the East Coast entirely. This would still generate large surf and rip currents along the East Coast. However, this scenario is the least likely to occur at this point.

The exact path of Irma beyond the end of the week remains uncertain and will depend on a variety of moving parts in the atmosphere. 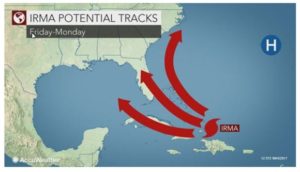 This feature will be the main driving force of Irma over the next few days. As the weekend approaches, other factors will come into play.

“The eastward or northeast progression of a non-tropical system pushing across the central and eastern U.S. this week will highly impact the long-range movement of Irma,” Kottlowski said.

How fast or slow this non-tropical system moves will be an important factor on where Irma is steered this weekend into next week. The speed of this feature will determine when and how much Irma gets pulled northward or whether Irma continues on more of a westward track.

This amount of uncertainty means that the entire southern and eastern U.S. should monitor Irma this week. Residents along the coast are urged to start preparing and making sure plans are in place to deal with the worst case scenario. This includes plans on how to evacuate and what is important to bring with you and your family.

“As we saw just 10 days ago with Harvey, it is important to be ready to evacuate,” Myers said. Be prepared with a list of items you would need to take if you had 30 minutes’ notice or one hour’s notice or six hours or a day to evacuate.

Due to Irma following so closely on Harvey’s heels and since FEMA and other government resources will be strained, more preparation and storm aftermath may rest on individuals, Myers said. It may be crucial to evacuate ahead of the storm, so preparation is key.

If Irma were to make landfall as a Category 4 or 5 storm somewhere in the U.S., it would be in historical territory.

“The U.S. has not sustained a direct hit from two Category 4 or above hurricanes in more than 100 years,” Myers said.