NNPA NEWSWIRE — By BlackPressUSA – While spending on energy since 2009 fell 10% to 15% across every income bracket, Americans’ non-energy spending on housing, vehicles, maintenance and insurance rose the fastest among those who could least afford increases. Real housing expenditures (excluding energy) by the lowest 40% of U.S. households by income increased about 10% between 2009 and 2019 – roughly three times the rate among wealthy households.

Most people are concerned when energy costs rise, especially prices at the pump. It’s understandable since the average household spent nearly $4,100 on energy in 2019, per the U.S. Bureau of Labor Statistics’ (BLS) Consumer Expenditure Survey.

For more than a decade, expanded U.S. energy production helped lower energy costs, giving consumers more disposable income to afford other essentials like food, education and healthcare, which rose by 27%, 38% and 75%, respectively, according to the Bureau of Labor Statistics (BLS).

However, with U.S. natural gas and oil production down recently, energy costs have been on the rise. The price of crude oil, historically the biggest factor in the cost of gasoline, has risen nearly 30% year over year (y/y), and consequently gasoline prices were up 14% y/y as of March 8, according to the U.S. Energy Information Administration (EIA). Electricity and natural gas bills also have increased faster than overall consumer price inflation so far in 2021.

Further energy cost increases could result from the Biden administration’s decision to halt new federal natural gas and oil leasing, potentially reducing domestic production, as well as other possible actions that could limit drilling or hydraulic fracturing. These could put upward pressure on energy costs that then could ripple across the broader economy. 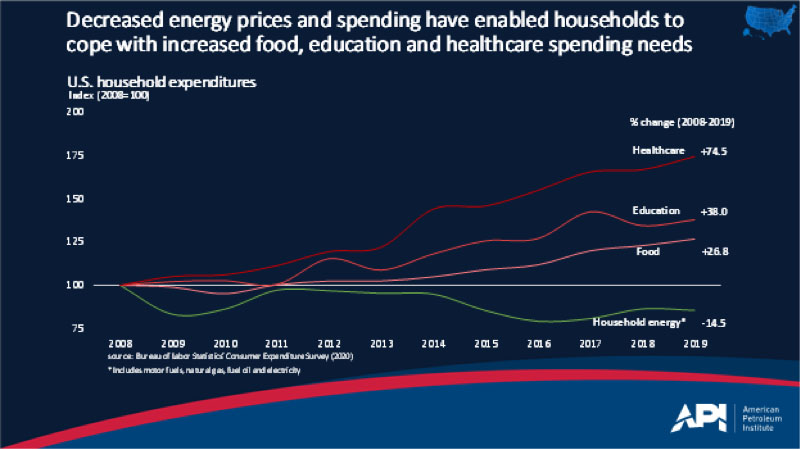 Yet, energy policy choices could affect far more than just what you pay for a gallon of gasoline or your monthly electricity bill.

For example, imagine trying to make ends meet if U.S. energy policies raised the costs of housing and vehicles, in addition to the energy they require. Housing, vehicles and energy represent more than half of a typical household’s expenditures.

While spending on energy since 2009 fell 10% to 15% across every income bracket, Americans’ non-energy spending on housing, vehicles, maintenance and insurance rose the fastest among those who could least afford increases. Real housing expenditures (excluding energy) by the lowest 40% of U.S. households by income increased about 10% between 2009 and 2019 – roughly three times the rate among wealthy households. Over the same period, real household spending on vehicles, insurance and public transit rose 35% among the lowest 20% of households by income, more than twice the rate of wealthier households.

These concerns loom over an economy where vehicles and housing have recently become even more expensive for some.

Now consider the potential costs of electric vehicles and charging infrastructure, which the administration is signaling it wants the nation to transition to and build; the ratcheting up of fuel economy standards, which the auto industry suggested in January would cost more than $1 billion annually; plus incentives and/or state requirements like California’s which mandate residential solar panels on new construction, estimated to add $8,400 to the cost of a single-family home. Each of these would add up-front costs that disproportionately impact the 60% of U.S. households earning $53,123 or less in 2019, per BLS.

To be clear, the industry supports higher energy efficiency where it is cost effective. However, policies that undermine domestic energy production and blanket regulations that favor certain technologies over others for vehicles or homes could harm consumers.

Higher costs for housing, vehicles and energy could ultimately require making sacrifices in the American way of life. Energy policies that could raise these costs should be discussed clearly and in the context of what is affordable to American households.

Dr. R. Dean Foreman is API’s chief economist and an expert in the economics and markets for oil, natural gas and power with more than two decades of industry experience including ExxonMobil, Talisman Energy, Sasol, and Saudi Aramco in forecasting & market analysis, corporate strategic planning, and finance/risk management. He is known for knowledge of energy markets, applying advanced analytics to assess risk in these markets, and clearly and effectively communicating with management, policy makers and the media.