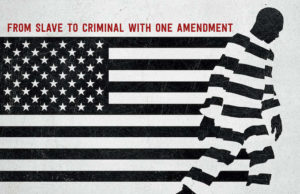 Ava DuVernay was finishing up her civil rights drama, Selma, when she got a call from a Netflix executive: Would DuVernay be interested in making a documentary? DuVernay, who had previously directed two docs, didn’t need to mull it over: “I knew I wanted to do something about prisons.”

Having been raised in Compton, Calif., DuVernay said she’d long been interested in race and criminal justice issues, and had even studied African American history in college. “I was always disturbed, fascinated, and furious [about]…the prison industrial complex,” she said at a press event.

On Friday, Oct. 7, DuVernay’s new, incendiary documentary about race and mass incarceration, 13th, debuts on Netflix NFLX 2.00% . (It also will have a limited theatrical release.) Named after the 13th constitutional amendment, which abolished slavery except as “punishment for crime,” the doc uses archival footage and expert commentary to make the case that slavery hasn’t disappeared from the U.S.—it’s evolved into our modern system of mass incarceration, one in which many prisons are run by for-profit companies and prisoners can be paid a pittance to work for corporations.

Coming at a time when Black Lives Matter and police bias are being hotly debated, 13th was the first non-fiction film to open the prestigious NY Film Festival in its 54 years. The movie received a standing ovation at a press screening attended by this reporter, and it’s already being touted as a possible Oscar nominee. “We didn’t choose a documentary,” NYFF’s director Kent Jones said at a screening. “We chose a film that happened to be a documentary.”

The 13th constitutional amendment was ratified in 1865 and stated: “Neither slavery nor involuntary servitude, except as a punishment for crime whereof the party shall have been duly convicted, shall exist within the United States, or any place subject to their jurisdiction.”

Interviewing noted legal thinkers like Michelle Alexander (author of The New Jim Crow), the documentary argues that this “loophole”— allowing forced labor for criminals—enabled resentful white society to imprison black citizens on minor charges and put them to work.

Since then, the film argues, a variety of measures—from Jim Crow laws to President Richard Nixon’s “war on drugs” and President Bill Clinton’s “three-strikes-you’re-out” legislation—have served to send increasingly large numbers of black men in prison, and several legal scholars and activists interviewed on camera suggest a profit motive at work, as well as racism. Corporations have reaped profits off the privatization of prisons and prison labor; some prisoners have gotten paid as little as 12 cents an hour, doing work for corporations, like Victoria’s Secret and Walmart.