A native of Grand Rapids, Michigan, Smith went to college at Jackson State in Mississippi, before starting his career at the Clarion-Ledger in Jackson. He went on to become a fixture in the NBA universe — first as a beat writer covering the Indiana Pacers for the Indianapolis Star and the Atlanta Hawks for the Atlanta Journal-Constitution, before joining Turner Sports in 2009.

For more than a decade, Smith starred across all platforms for Turner, serving as an analyst for NBA TV, a writer for NBA.com and a host of the Hang Time Podcast.

Smith is survived by his wife, Heather, and their three children, Gabriel, Rielly and Cameron.

“We are all heartbroken over Sekou’s tragic passing. His commitment to journalism and the basketball community was immense and we will miss his warm, engaging personality,” Turner Sports said in a statement. “He was beloved by his Turner Sports and NBA friends and colleagues. Our deepest condolences are with his family and loved ones.”

Smith was universally beloved within the basketball world, both for the work he produced in his nearly two decades covering the sport and, more importantly, for being a kind and decent person, one with an ever-present smile and a wonderful laugh. Those virtues, and many others, were reinforced in the outpouring of messages on social media following the news of his death. 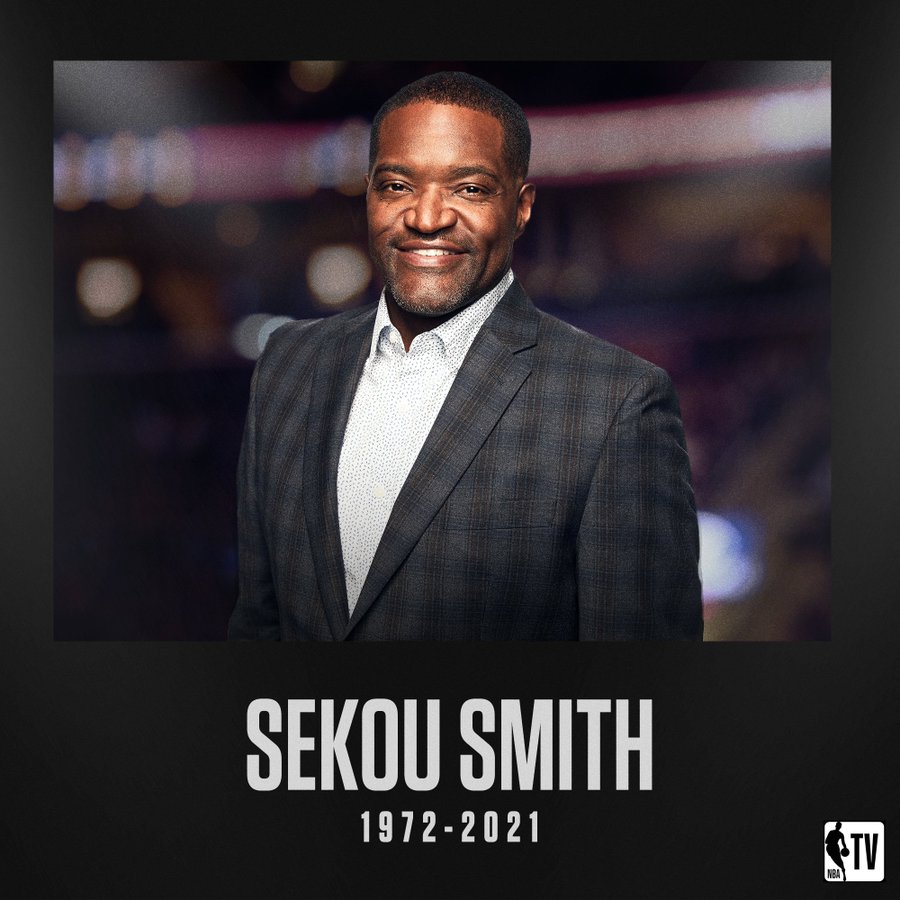 “The NBA mourns the passing of Sekou Smith, a beloved member of the NBA family,” Silver said in a statement. “Sekou was one of the most affable and dedicated reporters in the NBA and a terrific friend to so many across the league. He covered the game for more than two decades, including the past 11 years with Turner Sports, where he showed his full range of skills as an engaging television analyst, podcast host and writer. Sekou’s love of basketball was clear to everyone who knew him and it always shined through in his work. Our heartfelt condolences go to his wife, Heather, and their children, Gabriel, Rielly and Cameron.”

Both Kerr and Van Gundy spent time working with Smith at Turner Sports, and they took time to recognize his death after their respective teams practiced Tuesday.

“I just heard the news about Sekou Smith, and I am just devastated,” Kerr said. “I know I speak for our entire organization, just crushing news today. Sekou has been a part of the NBA family for a long time.

“I just want to express our organization’s condolences to Sekou’s family.”

“It just hit hard,” said Van Gundy, who worked with Smith at Turner Sports before taking the Pelicans job prior to this season. Van Gundy said he learned the news shortly before practice began. “I think for all of us, this COVID thing has been painful, to say the least. But when you lose somebody that you know, and that you admire and respect and who is young. I mean, he might not be young by some of your guys’ standards, but young by my standards — it’s just really, really hard.

“This thing is so scary and has brought so much grief to so many people. … Today is one those days. There’s a lot of people in Atlanta today grieving a great man in Sekou.”

NBA players past and present also offered their condolences on his death, including Phoenix Suns star Chris Paul and future Hall of Famer Dwyane Wade.

Smith, a passionate fan of the Michigan Wolverines, mentored countless colleagues in the business as a member of the National Association of Black Journalists. He also was one of a handful of journalists who spent time inside the NBA’s bubble at the Walt Disney World Resort in Orlando, Florida, to cover last season’s playoffs, including the NBA Finals.

Both the NABJ and the Pro Basketball Writers Association issued statements honoring his life and legacy, as did the Pacers and Hawks, the two teams he covered as a beat writer.

“The passing of Sekou Smith due to COVID-19 complications hits so many members of the NABJ Sports family extremely hard,” the NABJ said in a statement. “He was more than a colleague; he was a friend and brother to us, and so many others.

“Our deepest prayers go out to his wife, Heather, and their children.”

“Our members are devastated by the passing of our beloved friend and trusted colleague Sekou Smith,” the Pro Basketball Writers Association said in a statement. “He was a kind, caring person and a tremendous journalist. We love you, Sekou. Our thoughts and prayers go out to his family and his co-workers at Turner Sports.”

Longtime Hawks PR man Arthur Triche, who worked with the team when Smith was covering it, told ESPN, “He was my friend before he took the job here, and he became my best friend.

“He was my sidekick on the road, and people probably thought I was giving him company secrets, but that couldn’t be further from the truth. He was always telling me what was going on.”

Perhaps no one summed up Smith better and more succinctly than Hawks coach Lloyd Pierce after his team beat the LA Clippers in Smith’s adopted hometown of Atlanta on Tuesday night.

“As genuine of a person as there is in the industry,” Pierce said.