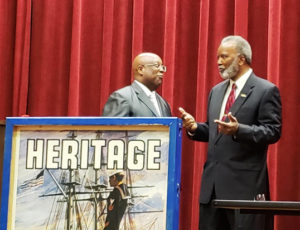 Diversity comes in many forms: gender, race, religion, sexual orientation, age, culture, socioeconomic background, etc.  For many African Americans serving in the military, the lack of diversity in leadership positions has historically been an major issue.  Award-winning local author and retired naval officer Reuben Keith Green and Navy Captain Glen Leverette recently spoke at a forum on diversity in the Navy at Jacksonville University’s Gooden Auditorium.

Green, author of Black Officer, White Navy, and Leverette, a JU alumnus, local native, and decorated surface warfare officer with extensive combat experience, spoke about their careers and the opportunities and challenges facing minority service members.  Also in attendance were local members of the National Naval Officers Association (NNOA), which Green urged naval officers to join early in their careers, something he regrets not doing.

Retired Rear Admiral Gene Kendall, who served with distinction for thirty-five years, spoke about historically black colleges and their contributions to the naval service, as well as the challenges they also face.  After the program, many of the JU NROTC cadets in attendance shared how helpful and informative the discussion was to them personally.  Green said that he is working on another book about minority veterans and their contributions.