This past weekend, soulful crooner Maxwell headlined his “50 Intimate Nights Live Tour” at the Times Union Center in front of a sellout crowd.  Stepping to the stage to start the evening off was Liverpool, England born and bred artist, Marsha Ambrosius.

Marsha warmed up the crowd with hits from her new album entitled, “Nyla,” named after her two year daughter. The album features the euphoric love ballets and jazzy songs that Ambrosius is known for.

The tour kicked off on September 27th in Richmond, VA., and will have the stars visiting some of North America’s most legendary theaters.

After swooning guest with her melodic tunes, Ambrosius was followed by Maxwell, who entertained the crowd with over an hour of old and new music.  His stage show was impressive with glittering lights, backup singers and plenty of dancing from the Haitian and Puerto Rican Soul Brother.

The crowd went wild while dancing and singing in unison to his plethora of soulful hits. Concert goers left satisfied and eager to attend the VIP meet and greet held at a local club on the Southside. The tour also has dates in Orlando and Hollywood, FL this week.

Shown below is  VIP fan Honor Parris with Maxwell 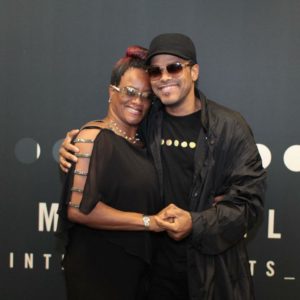