Breaking news
The Houston Texans have found their next head coach, albeit in the midst of controversy.

According to CBS Sports, the AFC South team has hired former Chicago Bears and Tampa Bay Buccaneers coach Lovie Smith to be their next head man after serving as their associate head coach and defensive coordinator in 2021.

Smith, 63, only recently emerged as a candidate for the Texans’ vacancy, but outlasted reported finalists Josh McCown (who has never coached in the NFL) and ex-Miami Dolphins coach Brian Flores for the job. Flores, last week announced a lawsuit against the NFL, the Dolphins the Denver Broncos and the New York Giants. The Texans franchise was not named as defendants.

“He is one of the most respected coaches in the NFL and an established leader,” said Texans general manager Nick Caserio in a statement about Smith’s hiring. “Lovie has shown the ability to develop players both on and off the field for years. We had numerous discussions with countless coaches, executives, and players, and what revealed itself is that Lovie has both the leadership and people skills it takes to lead us forward.”

One of the most experienced among prospective head coaching candidates, Smith previously served as head coach for the Bears from 2004 to 2012 and the Buccaneers from 2014 to 2015. He also coached the University of Illinois from 2016 to 2020. 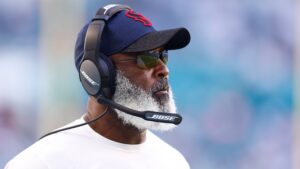 Smith is perhaps best-known for his nine-year run in Chicago, where he took a Bears team to the playoffs in just his second season after the team experienced back-to-back losing seasons. During his third year with the team, he led them to a 13-3 finish and a Super Bowl appearance.

But as Super Bowl LVI weekend approaches, the hiring of Smith still comes amid major controversy, given the gravity of Flores lawsuit, which accuses the league and the three teams named in the lawsuit of discrimination. With the new hire, the number of Black coaches increases as Mike Tomlin continues with the Pittsburgh Steelers and Mike McDaniels, who is described as biracial, becoming the new head coach of the Dolphins.

Flores, did come close to getting the Texans job, but his lawyers say, although he is happy for Smith, the only reason he didn’t is because of his lawsuit.

“We would be remiss not to mention that Mr. Flores was one of three finalists for the Texans’ head coach position and, after a great interview and mutual interest, it is obvious that the only reason Mr. Flores was not selected was his decision to stand up against racial inequality across the NFL,” his legal team said in a statement, according to CBS Sports.

“I understand the responsibility I have to this organization and this city to develop a championship-level program,” Smith said in a statement. “I’m ready to get to work and build it together.”