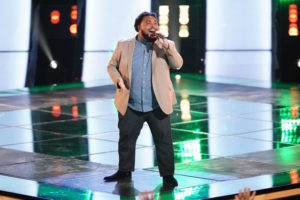 Blessed with a powerful voice, Matthew Johnson began singing in the choir at Northside Church of Christ in the seventh grade.  At the time, he had no idea that his God given talents would put him on the national stage and make him a protégé of an R&B superstar. His road to stardom began at eight years old when he and his family would sing karaoke during family vacations. Staying on track, Johnson built his resume by singing as a member of the church’s Total Praise Choir.

Johnson’s singing skills blossomed in the church. Every Sunday during worship service, a choir of acapella voices belt out gospel tunes to the congregation.  There are no symbols, tambourines, guitars or an organist accompaniment in the Church of Christ so true talent reigns supreme.

Spending years traveling with church choirs and performing in front of crowds of all sizes gave him the confidence to sing in front of millions.  So when Johnson received the opportunity to addition and be a part of the reality show The Voice, he was ready. Now under the tutelage of Grammy winning musician John Legend, the Mandarin High school graduate hopes to advance to the next round and possibly win money and a recording contract.

“I want to be an example for my community,” said Johnson. “Northside Church of Christ molded me as a man and a competitor, I picked up traits of established singers and gained confidence as we traveled and performed at various churches throughout the United States,” he added. I plan to to continue giving back to my community, performing and speaking and motivating youth, Jacksonville will always be my home,” he said.

Stay tuned for Johnson’s appearance on The Voice, Monday. March 25th, check your local TV listing for the time.