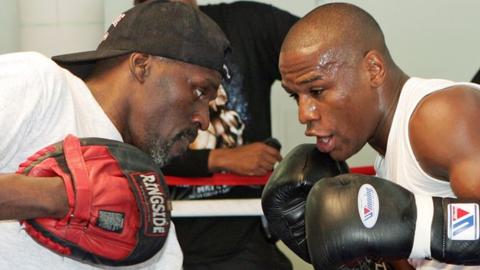 Mayweather turned pro in 1981, winning his first 17 career fights and capturing the WBA and lineal super featherweight championships in the process. In 1987, Mayweather added the WBC light welterweight title to his accomplishments. During his career, Mayweather mixed it up in the ring with several boxing legends, including Julio Cesar Chavez (twice), Pernell Whitaker and Kostya Tszyu. He was nicknamed “The Black Mamba.”

“My uncle was one of the most important people in my life inside and outside of the ring,” Floyd Mayweather said in a statement. “Roger was a great champion and one of the best trainers in boxing. Unfortunately, his health was failing him for several years and now he can finally rest in peace. Roger meant the world to me, my father Floyd Sr., my uncle Jeff, our whole family, everyone in and around the Mayweather Boxing Gym and the entire boxing world. It is a terrible loss for all of us.”

Mayweather found himself in legal trouble in the early 2010s after being charged with battery in an attack on one of his former boxers, Melissa St. Vil. He also went missing in 2016, possibly a result of claims from Floyd that he had begun to suffer memory issues after 72 fights in the ring, six of which were decision losses.