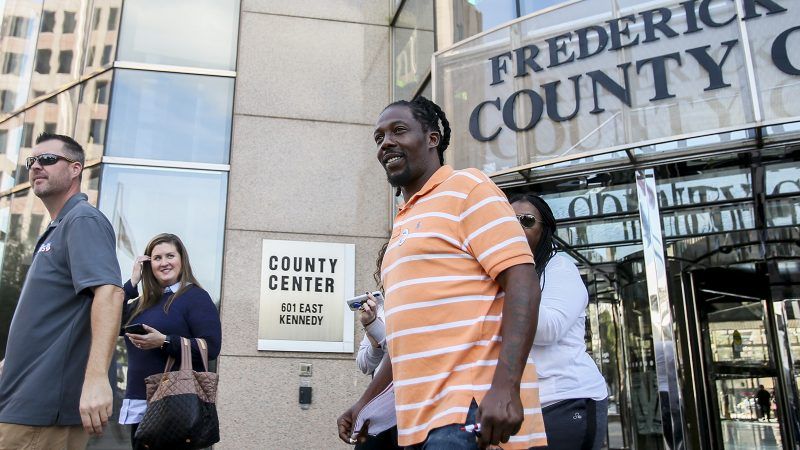 Rodney Johnson, 47, walks out of the County Center after registering to vote for the first time.  Johnson was released from prison in 2000. Since the passing of Amendment 4, Johnson is allowed to register to vote.

A federal judge ruled over the weekend that Florida can’t block former felony offenders from voting because they can’t afford to pay court fines and fees –  something Florida Republicans wanted desperately.

In a 125-page opinion, U.S. District Judge Robert Hinkle struck down parts of a law passed by Florida Republicans requiring those with felony records to pay off all fines and fees before they can regain the right to vote. Many considered the law similar to a poll tax of post slavery days.

“This order holds that the State can condition voting on payment of fines and restitution that a person is able to pay but cannot condition voting on payment of amounts a person is unable to pay,” Hinkle wrote. Hinkle also ruled that Florida can’t disqualify felony offenders who had a court-appointed attorney or had their fines converted into civil liens, a move that could restore voting rights to a potentially massive amount of people.

Hinkle ruled that denying voting rights on the basis of one’s ability to pay fines discriminates on the basis of wealth and violates the equal protection clause of the 14th Amendment. He also ruled that making voting eligibility rest on paying court fees—often tacked onto sentences to fund various judicial and law enforcement coffers—violates the 24th Amendment’s ban on poll taxes because the fees are “a tax by any other name.”

The ruling is a  victory for civil liberties groups and local activists who campaigned for Amendment 4, a constitutional amendment passed by Florida voters in 2018. That amendment was  supposed to restore voting rights to an estimated 1.4 million Florida residents with felony records—the largest single expansion of the franchise in recent history, and in a critical battleground state, no less.

“The Constitution is clear—you cannot make voting contingent on wealth,” ACLU of Florida legal director Daniel Tilley said in a press release. “It should alarm Floridians that there are people occupying the highest echelons of political power in our state who fought to keep Florida tied to its racist past and bar people from voting.”

Disagreement about how Amendment 4 should be implemented began immediately after it was passed. The language of Amendment 4 said that voting rights would be restored “upon completion of all terms of sentence including parole or probation,” but it did not say whether “all terms” included financial obligations imposed by courts.

Florida Republicans, including Gov. Ron DeSantis, argued that it did, and they passed a bill into law making voting eligibility contingent on paying off court fines and fees first. A panoply of civil rights groups filed lawsuits last year challenging the new law at both the state and federal levels.

Since then, the road has been long.

In January, the majority-conservative Florida Supreme Court released an advisory opinion upholding the law, but lawyers for the state found a less friendly reception in federal court.

Hinkle issued a preliminary injunction last October temporarily blocking the law and ordered state officials to come up with a clear and prompt process for determining whether a former offender has the ability to pay their fines and fees.

But at trial this April, the state’s own expert witnesses had trouble parsing the complex system Florida created to solve this problem. State officials repeatedly admitted they couldn’t easily track how much someone owed in criminal fines and fees; the documents were often scattered across multiple county agencies. In a withering opinion, Hinkle noted that “even with a team of attorneys and unlimited time, the State has been unable to show how much each plaintiff must pay to vote under the State’s view of the law.”

The Fines & Fees Justice Center has found that Florida courts, which are funded almost entirely through fines and fees, had “115 different types of fees and surcharges, the second highest number in the country.” As a result  Florida felony offenders would have to pay back hundreds of millions of dollars to restore their voting rights.

“This court decision adds another remarkable chapter in our fight as returning citizens to participate in our democracy,” said Desmond Meade, Executive Director of the Florida Rights Restoration Coalition, following Hinkle’s ruling.. “We will remain vigilant in our commitment to place people over politics, and ensure that all returning citizens, no matter how they may vote, have an opportunity to possess what we believe to be the most endearing sign of citizenship, the right to vote.”