By Clare Foran – Washington (CNN)Lawmakers and the American public are paying their respects to the civil rights icon and late congressman, Rep. John Lewis of Georgia, on Monday as his body lies in state at the US Capitol in Washington, DC.

Lewis is the first Black lawmaker to lie in state at the US Capitol Rotunda, according to congressional historians.
Last year, the late Rep. Elijah Cummings made history as the first Black lawmaker to lie in state at the US Capitol when his body was lain in state in Statuary Hall.
Lying in state is a tribute reserved for the most distinguished government officials and military officers, while lying in honor is a distinction given to private citizens. Two African Americans have lain in honor: civil rights icon Rosa Parks and Officer Jacob J. Chestnut Jr., a Capitol Police officer killed in the line of duty.
Lewis’ body is now laying in state following an invitation-only arrival ceremony, earlier Monday. A military honor guard escorted the casket up the steps of the Capitol and carried it into the Rotunda.
While waiting to retrieve the casket, one of the military pallbearers — in Navy dress whites — fainted. They had been standing at attention on the East Front Plaza for nearly an hour. At the time, the temperature was around 94 degrees in Washington, according to the National Weather Service.
Following the ceremony in the Capitol Rotunda, a public viewing began outdoors at the Capitol as a safety precaution during the coronavirus pandemic.
But neither the virus nor warm weather kept crowds from lining up for a chance to pay their respects to Lewis’ casket.
At one point Monday evening, lines to reach the Capitol stretched for multiple blocks all the way to the Supreme Court building.
Lewis’ casket had arrived at Joint Base Andrews in Maryland earlier in the day on Monday and was brought via motorcade to the US Capitol, passing by a number of Washington, DC, landmarks along the way, including the Rev. Martin Luther King, Jr. Memorial.
King was a friend and mentor to Lewis, who worked alongside King in the forefront of the historic struggle for racial justices in the 1960s.
The motorcade also stopped at Black Lives Matter Plaza and Washington Mayor Muriel Bowser presented the congressman’s son, John Miles Lewis, and other family a Black Lives Matter Plaza street sign. They stood by a mural painted of Lewis on his last ever public appearance on Sunday, June 7 when he visited the plaza and called the words emblazoned in yellow paint on the street, “a powerful work of art.”
Members of the public will be able to pay tribute to the late Georgia Democrat during select times later in the day on Monday and throughout the day Tuesday as his body lies in state at the top of the East Front Steps of the Capitol. The public will be permitted to file past in the Capitol’s East Plaza. Members of the public will be asked to adhere to social-distancing and DC mask guidelines. 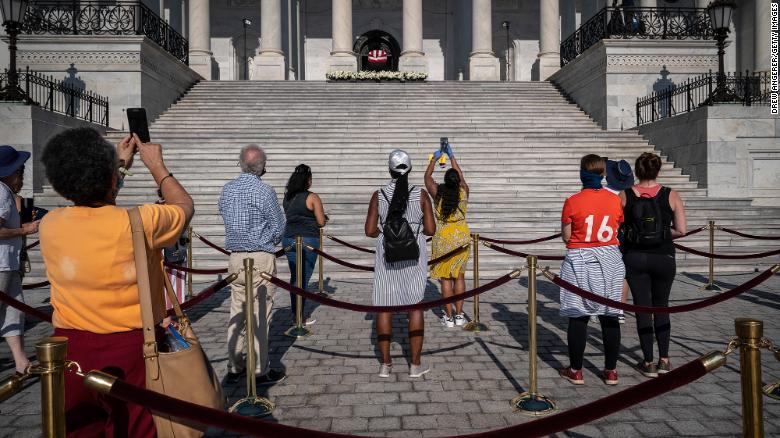 Among those expected to pay their respects to Lewis as he lies in state are former Vice President Joe Biden, Jill Biden, Vice President Mike Pence and second lady Karen Pence.
President Donald Trump, however, said on Monday that he won’t pay his respects to Lewis as he lies in state at the US Capitol.
“No I won’t be going, no,” Trump said when asked whether he would travel either later Monday or Tuesday to honor the late congressman and civil rights icon.
Earlier Monday, the White House said Vice President Mike Pence and his wife Karen would pay their respects to Lewis on Monday evening at the Capitol building.
Trump offered brief words on condolence on Twitter after Lewis’s passing last weekend and ordered flags lowered for a day.
Lewis, who served as the US representative for Georgia’s 5th Congressional District for more than three decades, was widely seen as a moral conscience of Congress because of his decades-long embodiment of the nonviolent fight for civil rights.
He died at the age of 80 following a six-month battle with cancer, a loss that sparked an outpouring of grief and tributes to his life and legacy across the country.
Lewis, the son of sharecroppers, was a towering figure of the civil rights movement.
Angered by the unfairness of the Jim Crow South, he launched what he called “good trouble” with organized protests and sit-ins. In the early 1960s, he was a Freedom Rider, challenging segregation at interstate bus terminals across the South and in the nation’s capital.
At age 25, Lewis helped lead a march for voting rights on the Edmund Pettus Bridge in Selma, where he and other marchers were met by heavily armed state and local police who attacked them with clubs, fracturing Lewis’ skull. Images from that “Bloody Sunday” shocked the nation and galvanized support for the Voting Rights Act of 1965, signed into law by President Lyndon B. Johnson.
Following a short ceremony outside of Brown Chapel AME Church on Sunday, Lewis’ body traveled on a horse-drawn caisson through several blocks of downtown Selma to the Pettus Bridge, where Lewis’ flag-draped casket crossed. 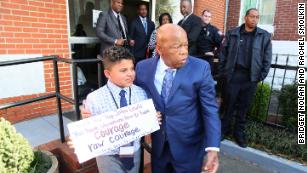 A celebration of Lewis’ life has been taking place over the course of six days starting over the weekend on July 25 with events in Alabama, Georgia and Washington, DC. Lewis’ body will be accompanied by a military honor guard, including when he lies in state in the nation’s capital.
Following the events in Washington, DC, Lewis will lie in state in the Georgia State Capitol on Wednesday.
On Thursday, there will be a “celebration of life” at Ebenezer Baptist Church Horizon Sanctuary in Atlanta, followed by interment at South-View Cemetery.
Due to the pandemic, the family is also encouraging people to organize “John Lewis Virtual Love Events” to watch the events at home via livestream.
Ahead of the ceremony in the Capitol Rotunda on Monday, the House approved a measure offered by House Majority Whip Jim Clyburn to rename a House-passed voting rights bill after Lewis.
The House passed the measure in December that would restore a key part of the historic Voting Rights Act that the Supreme Court struck down in 2013. Democrats have pushed the Republican-controlled Senate to take up the legislation following Lewis’ death.
This story has been updated with additional developments Monday.

For more on this article visit: https://www.cnn.com/2020/07/27/politics/john-lewis-lies-in-state-capitol/index.html