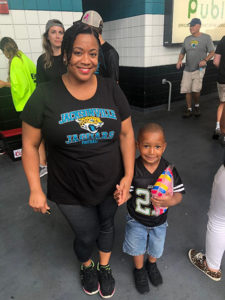 Jacksonville opened the game fast and put the first points on the board behind a Keelan Cole’s touchdown. A touchdown that was set up by a Leonard Fournette’s 66-yard run through a massive hole in the Jets’ defense. Josh Lambo missed his only kick of the day on the extra point attempt of the opening drive.

Later in the quarter, the Jets responded with a touchdown of their own with a reception from tight-end Ryan Griffin. This would be the only time that New York held a lead.

Jacksonville’s rookie quarterback Gardner Minshew II created another dose of Minshew magic, when he dodged a tackle and connected with Chris Conley who ran down the field for a touchdown, putting the home team back on top. Minshew credited his teammates, especially Fournette with moving the defense in his favor.

On the defensive side of the ball, the Jaguars read Sam Darnold and the Jets. Tre Herndon picked off two of Darnold’s passes while A.J. Bouye reeled in one of his own. When Darnold was not throwing the football to defensive backs, he was on the wet ground of TIAA Bank field.

Similarly, to other games, Jacksonville’s red-zone offense struggles emerged with Lambo kicking for points instead of touchdowns. 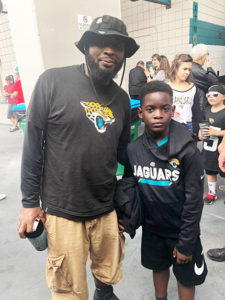 In the final quarter, Griffin scored his second touchdown and the two-point conversion bringing the scoring margin closer, 22-15. With Bouye’s interception, the Jaguars were set up to have the ball deep in Jets’ territory. After two unsuccessful downs, Minshew connected with D.J. Chark Jr in the front of the endzone for the only Jacksonville’s touchdown in the second half.

The Jacksonville Jaguars will make the trek across the pond to play the Houston Texans on Sunday,Nov. 3rd at 9:30 am.