By Andrew Pantazi | The Tributary – Jacksonville City Council members used race as a decisive factor in drawing new district lines — but did so without ever determining their actions were necessary to protect Black voters, potentially violating the U.S. Constitution’s Equal Protection Clause, experts warn.

Last February, city lawyers drafted a memo that warned council members they would violate the Constitution if race was a “predominant factor” in redistricting decisions. 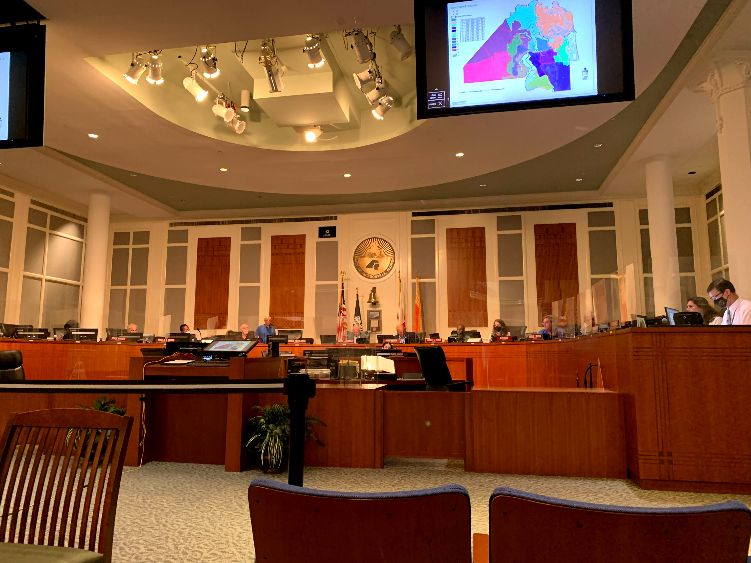 Experts say race can be a predominant factor, but only if a detailed analysis shows that a racial minority would be disenfranchised if race wasn’t taken into consideration.

That analysis was never done in Jacksonville, and the City Council never ruled that Black voters needed protections. Yet council members continued to demand districts that maintained or increased the Black population in four of the 14 districts.

The City Council’s special redistricting committee prioritized maintaining the same map with as few changes as possible. The 2011 City Council also didn’t conduct any racial voting analyses when it drew the current maps even though racial demographics were an explicit decisive factor.

“It’s shocking they didn’t do it back then and didn’t do it right now,” said Dan Smith, a University of Florida professor who has testified as a redistricting expert in federal lawsuits. “It’s frustrating because the popular perception of redistricting is very different from the more scientific understanding of redistricting. When it’s driven by incumbents, their first and foremost concern is their own protection of their own seats.”

Intentionally packing in Black voters beyond what is necessary into a few districts hurts those voters’ ability to have a say in city politics. But doing so could create safer seats for the incumbents drawing the maps.

Rebecca Green, a professor at William and Mary Law School, said that while the City Council has to consider race to make sure they don’t deny equal access to voters from racial minorities, “if you take it into account too much, you run afoul of racial gerrymandering.”

The proposal the redistricting committee chose, which will be introduced at tonight’s City Council meeting, will see Black residents range from 61 percent to 70 percent of the total population in four City Council districts. That means more than half, or about 55 percent, of Duval County’s Black residents live in four out of 14 districts.

Because of that, even though Black residents make up about 32 percent of the county, according to the 2020 Census, they would make up much smaller portions of the population in most City Council districts, strengthening the power of white voters in those districts. White residents make up 49 percent of the county population, yet they will make up a majority of voters in nine of the 14 districts.

“You cannot arbitrarily pack that to 55 percent or 60 percent [Black],” said Jeff Wice, a professor at New York University Law School and an editor of the National Conference of State Legislatures’ 2020 redistricting law handbook.

If the city draws seats intended to elect Black voters’ candidate of choice without first analyzing what percent of Black residents is high enough to accomplish that, then, he said, “you’re inviting problems later. Do your homework on the front end. Don’t wait for litigation later.”

The Voting Rights Act and the 14th Amendment are intended to protect minority voters, not necessarily minority candidates. Racial voting analyses can determine which candidates are preferred by Black voters both in primaries and in general elections.

Jacksonville is already home to a congressional district, a state senate district, a state house district and one City Council district where Black voters are in the minority yet consistently nominate and elect their candidates of choice, according to an analysis by the Tributary.

Two Black City Council members expressed concerns about any efforts that might reduce the percent of Black residents living in their districts, even if their districts remained majority Black. Ju’Coby Pittman balked at the idea of adding Baldwin, a white-majority town, to her district, and Reggie Gaffney said he worried that adding residents who were mostly Republican and white would taint his seat.

“I want to make sure that [Councilman Gaffney’s] comfortable and I’m comfortable in terms of the population that’s Black and white,” said Pittman, whose district will be 70 percent Black under the newly proposed map, in one September meeting.

City Councilwoman Brenda Priestly Jackson responded by telling her fellow councilmembers to use party labels instead of race. “We can’t use the ethno-racial identifiers, so we’ll talk about some of the party stuff. We just have to be very, very clear for our communities of interest that we’re identifying that.”

In that meeting, City Planning Director Bill Killingsworth read off the racial data for each census block that he was attempting to add to Pittman’s and Gaffney’s districts.

Priestly Jackson interjected, “Do you have the party registrations? That’s, uh, more germane.”

Repeatedly, Gaffney said he needed to make sure adding certain blocks would “make the numbers work.”

Priestly Jackson then explained what he meant. “I think what Councilman Gaffney’s concerns are: if you’re going to put 3,300 new individuals in [District] Seven and those are 3,300 individuals that are leaving [District] Two,” which is a Republican-held, majority-white district, “he is concerned about the overall impact to his district with those numbers in terms of who they are.”

“What are the breakdowns in terms of Republicans versus Democrats?” asked Councilwoman Randy DeFoor. “That’s what he wants to know. That’s what you want to know. Let’s cut to the chase.”

“I might need to keep that [neighborhood] if I look at the demographics,” Gaffney said pointing to the map, “if I’m going to pick up a highly Republican [neighborhood], and … my numbers might be a little higher. Demographically, it may still work. I don’t know.”

“It just seems like we’re honing in on a certain statistic, and it’s my recollection that by law we’re really not supposed to be working from that standpoint,” he said. “It seems like we’re going to do tomorrow what we did yesterday. Does it end here or do we just continue what we’ve always done in that regard?”

A city employee explained, “You don’t want to dilute a population, and you don’t want to create a map that will also cause problems by increasing the numbers and then having an opposite unintended consequence.”

Becton replied, “Race may be considered as one factor, but it can’t be predominant over other required factors — geography, compactness, yadda yadda yadda — and it just seems like and feels like we’re continually making it a predominant priority by putting it out there.” 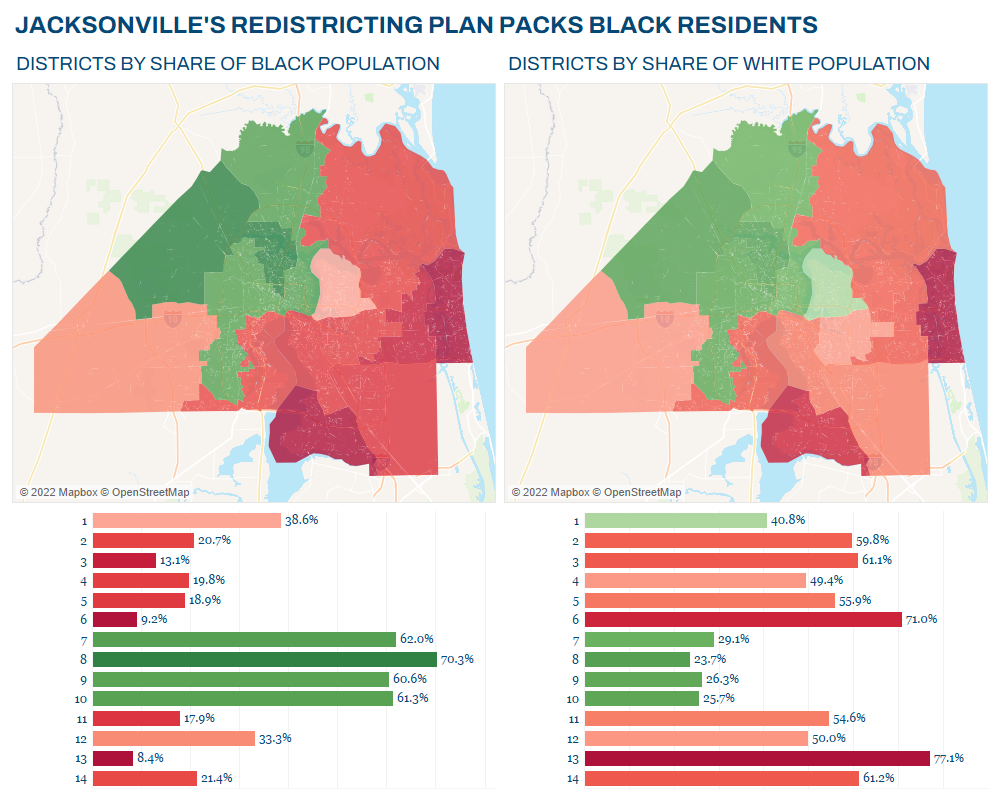 Eunice Barnum, president of the Sherwood Forest/Paradise Park Community Association, said she doesn’t believe the current maps serve neighborhoods like hers, which sits right near the Trout River on the Northside.

“They do this kind of stuff without engaging the community,” she said. She lives in District 10, which is shaped like a seahorse and stretches from Sherwood Forest almost all the way down to Collins Road near the county border. “Why would I be interested in having somebody way out [near] Orange Park telling me what I need in Sherwood, and they would need MapQuest to get over here? How would I know what they need at Doctor’s Inlet if I don’t even know how to get there?

“The whole thing is a farce to me. I’m sick and tired of people making decisions about us without us.”

City law requires all districts be “as logical and compact a geographical pattern as it is possible to achieve”, and the “districts must take into consideration other factors, particularly compactness and contiguity, so that the people of the City, and their varied economic, social and ethnic interests and objectives, are adequately represented in the Council.”

Celia Miller of the Myrtle Ave Neighborhood Improvement Association said the redistricting plan, and the districts passed a decade ago, fail to meet those metrics.

Gaffney and Pittman didn’t return requests for comment. Previously, Gaffney has told The Tributary that he didn’t want to see a change in the Democratic share of voters in his district.

He also said he would’ve preferred the City Council start redistricting from scratch, but he was under the impression that the City Council was under more of a time crunch this time. In fact, because the new maps won’t go into effect until 2023, the City Council had just as much time to redraw districts as in the past.

Priestly Jackson declined to comment last week, but previously she has defended District 10’s shape to The Tributary. “Is that district shape challenging to represent or create any conflicts? To me, it isn’t.”

At another redistricting meeting, Phillip Miner of the Duval County Democratic Black Caucus complained about the vague language council members used. He asked them to define what they mean when they say they are “comfortable” or “uncomfortable” with certain changes. No one answered.

‘PACKING IS NOT THE ANSWER’

“Packing is not the answer,” said Marcella Washington, a retired political science professor who studied Jacksonville’s Black politics. “That shows a lack of sophistication in Black politics in Jacksonville. The status of Black folks in this city is reflected in the Black representation in the city. Our politics are changing, but the Black politicians out there are not going to get it done.”

The current map in place, said Sheldon Howard Jacobson, director of the Institute for Computational Redistricting at the University of Illinois at Urbana-Champagne, who examined the map for The Tributary earlier last summer, “is a very gerrymandered map. If they want to continue to do the same thing, they’re going to continue to get the same results.”

Jacobson said the City Council could increase its minority representation if it would pack in fewer Black residents in its districts.

“The more you push the minority percentage higher in this set of districts, … it hurts very deeply what you’re trying to help,” he said. “Do you need such an extreme percentage to ensure minority representation? You don’t need it.”

“Just because you’re following the prior district boundary lines doesn’t mean the prior districts weren’t in violation of the Voting Rights Act,” said Michael McDonald, a UF professor and redistricting expert.

Wice agreed and said the city really needed to first “undertake qualified racial voting analysis” rather than going with the gut feelings of individual council members about what demographics would be appropriate.

City Councilman Garrett Dennis, who told The Tributary before the redistricting process started that he believed the current Black-majority districts had been packed, said last week that he believed his district was still gerrymandered.

“There were a few missed opportunities,” he said. The process of redistricting deferred to individual council members to decide what was best for their districts, and “it was hard for anyone outside of that district to say this is not what we want. ‘That’s not your district.’ I serve on a body of 18 people that is reticent, that does not want to chastise their colleagues.”

He said he went along with preserving the status quo — his district doesn’t change at all in the new map — in part to prevent the map from becoming more gerrymandered.

“I wish that every city council district was evenly mixed and competitive,” he said. “When you have competitive districts, then council members will be more open to different ideas and really have the best interests of their constituents and their city at heart.”