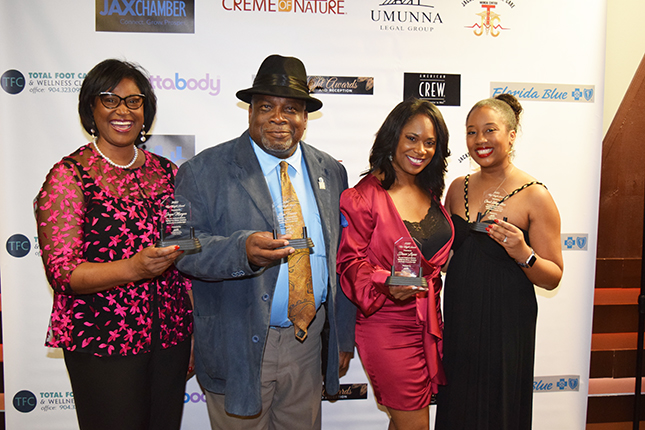 The Umunna Legal Group paid tribute to media excellence honoring local contributors of color. “The community appreciates those candid moments and we appreciate the media continually using their voice to share those important stories with others,” said Nwabufo “Obi” Umunna, Esq.
To celebrate the achievements, the legal group hosted the inaugural first, “Ken Knight Awards” to award and honor trailblazers from all walks of African-American Media of Jacksonville. The evening brought together journalists, personalities, producers, influencers and marketing professionals at the XO Lounge near the beaches. Guests were privy to a private cocktail party for their guests and sponsors.
The award is named after Kenneth ‘Ken’ Knight, one of the South’s and Jacksonville’s leading Black pioneer broadcasters and television personalities. Mr. Knight produced the local “Knight Train” show, a very popular show that aired on WRHC, before moving on to WPDQ, where he became vice president. Many credited Mr. Knight with the increase in Black Artists’ sales. He was the only African American broadcaster from Florida to serve in this capacity. Mr. Knight helped to found the National Association of Radio and TV Announcers in 1955 and served as treasurer, vice-president and chairman of the board of the aforementioned organization. Ken Knight passed away on September, 12, 1973. Ken Knight will always be remembered and honored as one of America’s most successful and accomplished African Americans media personalities in the city.
Shown (l-r) are this year’s honorees Community Activist Ben Frazier, City Councilwoman and former newscaster Joyce Morgan, Newscaster Dawn Lopez and Producer Chanel Leblanc Aikens