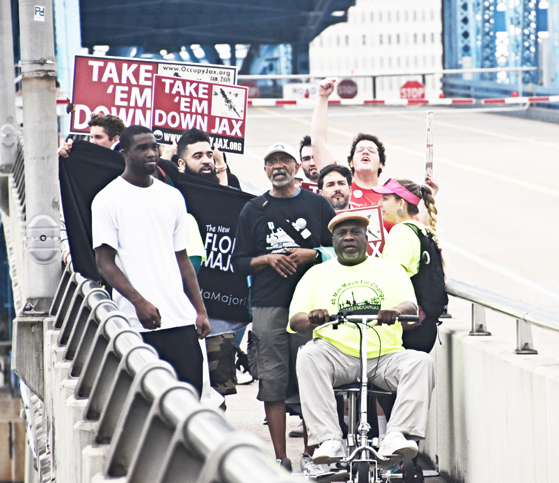 In the spirit of non-violent protest, #TakeEmDownJax and the Northside Coalition led a 40-mile “March for Change” from Jacksonville to St. Augustine to bring awareness to confederate statues on the First Coast. Protestors want the statutes relocated because they feel they represent racism and white supremacy. Activist filled Hemming Plaza for a press conference before beginning the 40 mile trek down A1A. During the press conference, invited speakers spoke to the crowd delivering messages of change, advocacy and hope for the future. Throughout the two day march, escort vehicles were available to supply water, food, sunscreen, bathroom breaks and other necessities.

Protestors camped overnight at the half way point, concluding at the Old Slave Market in St. Augustine.

“This has been an amazing journey. We will continue to protest and challenge the system for the removal of these monuments,” said organizer Ben Frazier, president of the Northside Coalition. Statures under ire include one in Hemming Plaza, Florida Confederate Solders memorial and two in St. Augustine. Shown are the protesters June Kemp, Lauren Cephus and Ben Frazier (NSCOJ) headed across the in Hemming Plaza and on main street bridge. (Ashley Taylor photo)